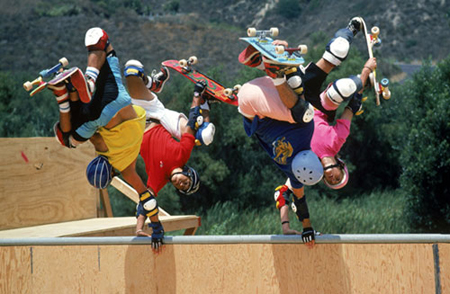 Bones Brigade: An Autobiography (Bones Brigade) — For anyone who came of age during the 1980s, Stacy Peralta’s documentary about the superstar teenage skateboard team that he assembled is a surefire hit. It also happens to be one of my very favorite new films of 2012. Best—and perhaps trickiest—of all, this doesn’t seem like self-serving filmmaking whatsoever. Peralta must have had an incredibly hard time figuring out how to approach this intimate subject matter, but he pulls it off like a pro. (On a personal note: one of the first home movies I made with friends was called The Search for Animal Ben, so, yes, this story is one that hit very close to home.) Available for purchase and download—in many variations with very many supercool perks!—at the Bones Brigade website; also available for rental/purchase at iTunes.

Corpo Celeste (Film Movement) — Gently toeing the line between quotidian and holy, thing and symbol, Alice Rohrwacher turns an open face to dogma in her debut feature. A navigation of debased late-Catholicism seen through the eyes of a guileless thirteen-year-old transplant named Marta (Yle Vianello), Corpo celeste has the familiar/family trappings of a Sundance squish: life lessons ‘round every corner, imminent menstruation, sick/sweet mom, nasty/loyal sister, God in all His guises. But Rohrwacher, gentle with a fine cast and assured with Super-16mm handheld, somehow leaps over 90% of the hazards by turning the material’s commonness into a central theme: rituals here are domestic drudgery, indistinguishable from sweeping the stairs and making the bed and, yes, getting your period. Slyly layered with quiet desperation, the film winds its way eventually to a shipwreck of a town, left with nothing to strip but a crucifix. Always attuned to the weariness in symbols, Rohrwacher grants Marta a chance to caress the cross, and we see it as she does: a beautiful, inconvenient old hunk of wood. Available on DVD

Your Sister’s Sister (MPI Home Video) —  Your Sister’s Sister, the remarkably assured fourth feature film from Lynn Shelton (My Effortless Brilliance, Humpday), is the story of Iris (Emily Blunt) and Jack (Mark Duplass), two longtime friends looking to find happiness at the end of a difficult year. When Iris offers Jack the opportunity to get away from it all by staying alone at her family’s home in an isolated corner of an island wood, he seizes the chance to spend some time dealing his emotions. But when Jack arrives, he discovers Iris’ sister Hannah (Rosemarie DeWitt), in need of her own introspective space, has set up shop in the house. Without revealing the charms and surprises of the story, it’s safe to say things get unexpectedly complicated before coming to a graceful resolution that has a lot to say about how we define family in the 21st century. Read Tom Hall’s full HTN review. Available on DVD

The Day He Arrives (Cinema Guild) — Another Hong Sang-soo misadventure! Available on DVD

The Rolling Stones: Charlie Is My Darling – Ireland 1965 (ABKCO Films) — Available on DVD

Last Call At The Oasis (Docurama) — Available on DVD

Even The Rain (Image Entertainment) — Available on DVD