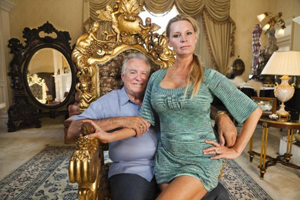 The Queen of Versailles (Magnolia) — As I left the screening of the documentary The Queen of Versailles, my immediate thought was, “This is why we can’t have nice things.” Director Lauren Greenfield has created a complicated, fascinating, and humbling film, perfectly calibrated to the zeitgeist. Election year rhetoric aside, we remain in the ever-widening wake of the Great Recession, and Greenfield’s riches-to-rags story releases waves of conflicting emotion: pity, schadenfreude, guilt, empathy, disgust. With fortuitous—and perhaps shrewd—timing, her film captures an America in flux. Read Susanna Locascio’s full HTN review. Available on DVD

2 Days in New York (Magnolia) — I’ve been known to knock the French, toodling around on bicycles with their phallic baguettes, vin rouge, and perennial boredom with all things Americain. But is there any way to withstand the Julie Delpy charm offensive? She had me at bonjour in this witty comedy, a sequel to her earlier film 2 Days in Paris. Delpy (who wrote and directed the film) reprises her role as Marion, now living with her boyfriend Mingus (Chris Rock, nicely subdued, and funnier for it). On the eve of a big gallery opening of her photography, Marion’s very French father and sister come to visit, and hilarity ensues. The film is silly, and light on its feet, but I know this sort of influx of European family members very well, and Delpy gets it right. If you surrender to the madcap humor, 2 Days in New York can be a very good time. Read Susanna Locascio’s full HTN review. Available on DVD

They Call It Myanmar: Lifting the Curtain (New Video) — Available on DVD