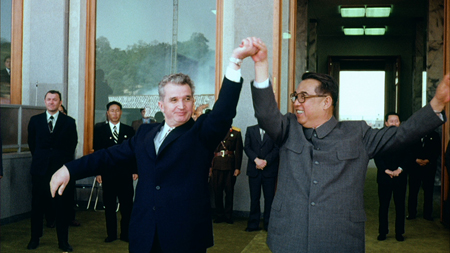 The Autobiography of Nicolae Ceausescu (Kino Lorber) — One thing you should know about Andrei Ujica’s epic three-hour documentary about Romanian president Nicolae Caeusescu: the title is ironic. Though you’d have to be missing a screw or two not to figure that out while watching it. Filled with a staggering array of archival footage (most of which appears to be 16mm), we join Ceausescu as he visits the home soil of other countries, welcomes leaders of other countries onto his home soil, visits businesses and construction sites, holds parades (the most incredible of which is a moving sports demonstration that must be seen to be believed), and, of course, plays volleyball? Ujica bookends his film with harsh interrogation footage of the former leader, when the time has come for him to be punished for his sins. The Autobiography of Nicolae Ceausescu is a strangely exhilarating experience. Available on DVD

Herman’s House (First Run Features) — To be frank, most documentaries that feature comparatively privileged white individuals devoting their time and energy to bettering the lives of less fortunate people of color come off as tacky at best and condescending at worst. In these situations, there is an unavoidably, incredibly thin line between the inspirational and the egotistical. Yet in Herman’s House, Angad Bhalla finds a way to keep things from succumbing to the latter. This can be attributed to a few things: his and editor Ricardo Acosta’s narrative construction, which covers much ground without ever losing the film’s primary thread; Jackie Sumell, who proves that she’s in this for the long haul; and, of course, Herman Wallace himself, whose refusal to become bitter or give up on his dream of freedom is a flat-out miracle. Read the full HTN review. Available on DVD

From the Head (Breaking Glass Pictures) — Available on DVD

The Girl (Virgil Films and Entertainment) — Available on DVD