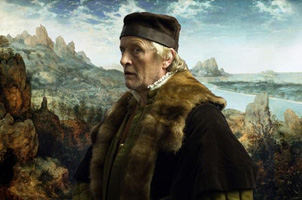 The Mill & The Cross (Kino/Lorber) — I planned to write a gushing review of Lech Majewski’s ingenious film when it was released theatrically, but I found myself ill-equipped to do just that. Frisky, compelling, and, perhaps most importantly, artful without being pretentious, The Mill & The Cross genuinely succeeds at inserting viewers inside the frame of a classic painting. And it’s very funny too! Available on DVD

Drive (Sony) — A full confession: My life was not changed by Nicolas Winding Refn’s Ryan Gosling vehicle (pun intended). That said, I had a rather large sh*t-eating grin on my face as it spiraled into directions that I found to be deliciously homoerotic and over-the-top. This is a very fun movie and that is at best what I found it to be. But let me be clear: when it’s this much fun, that’s good enough for me. Available on DVD

The Other F Word (Oscilloscope) — In its early chapters, Andrea Blaugrund Nevins’s The Other F Word ambles along congenially yet unremarkably. Perhaps it’s the popumentary aesthetic—snappy editing, uptempo guitar rock soundtrack, behind-the-scenes glimpse into the daily lives of notable musicians—that might have you thinking this project would have been better served as a half-hour MTV show rather than a 100-minute feature film. But something unexpected happens along the way. Insights are shared and emotions are exposed that turn The Other F Word into a genuinely poignant statement on fatherhood. Considering the source, that’s saying something. Read my full HTN review. Available on DVD

The Woman (The Collective) — Lucky McKee’s latest collaboration with Jack Ketchum was released last week, but I didn’t watch it until getting back from Sundance. This is a severely brutal motion picture, and while I quite “enjoyed” it, I also feel like some sort of disturbed person for *recommending* it. Yet here it lands in the “recommended” pile. Available on DVD

The Piano (Lionsgate) — Available on Blu-ray

, and in an “Extended Edition” at Amazon Instant