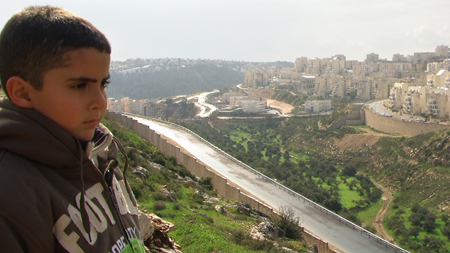 5 Broken Cameras (Kino Lorber) — A personal video diary of a motion picture, Emad Burnat and Guy Davidi’s infuriating film collects on the ground footage shot by Burnat over the course of five years and on five different cameras (that’s because they were maimed in the line of fire). While it’s borderline impossible not to read 5 Broken Cameras as a bitter indictment of an Israeli regime that bullies its way onto Palestinian land through shady political tactics at best and criminally inhumane acts at worst, Burnat’s measured voice-over and loving footage of his growing son Gibreel prevents this from become an all-out screed. By simply presenting the ceaseless corruption and senseless murders from Burnat’s position on the ground, the filmmakers give voice to a people who are confused, frustrated, and forced to bear this maddening weight. Required viewing. No excuses. Available on DVD

Detropia (Docurama) — Although I wouldn’t have minded someone with the Ross Brothers’ aesthetic delivering this much-needed symphony of that great, embattled American symbol of decline called Detroit, Heidi Ewing and Rachel Grady are quite capable themselves. Detropia does everything “right” and while sometimes it may feel a little too tried-and-true, the film remains full of distinctive cinematic flourishes that elevate the slightly predictable material. Meanwhile, the love of the place that the filmmakers clearly feel comes through vividly in every frame. Viva the Motor City! (Robert Greene) Available on DVD

China Heavyweight (Zeitgeist) — It’s hard to follow a debut feature that I consider to be one of the best documentaries ever made—Up The Yangtze—and while China Heavyweight certainly doesn’t hit those outer space-shattering heights, it is nonetheless a beautifully photographed portrait of individuals in modern China who are trying to make their way through a complex world. This and Kim Longinotto’s Gaea Girls would make for a tasty double-feature! Available on DVD

The Other Dream Team (Lionsgate) — From reading the description, it might seem like one needs to be a diehard basketball fan to appreciate Marius Markevicius’s The Other Dream Team, when that isn’t, in fact, the case. The cultural and historical component of this film is actually the real reason to check it out. Watching a bunch of Lithuanian dudes wearing Grateful Dead-sponsored tie-dyed uniforms while displaying exceptional bball skills only adds spice to an already hearty soup. Read the full HTN review. Available on DVD

Battle For Brooklyn (Virgil Films and Entertainment) — Available on DVD

The Man Who Knew Too Much (Criterion) — Available on DVD

Hannah And Her Sisters (MGM) — Available on Blu-ray

To Rome With Love (Sony Classics) — Available on DVD