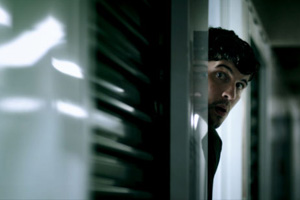 Cold Weather (MPI Home Video) — Reuniting with Quiet City‘s Cris Lankeneau, Aaron Katz and his team (Brendan McFadden, Ben Stambler) return to the Pacific Northwest environs of Katz’s debut feature, Dance Party USA, to tell the story of a brother-sister reunion (Lankenau and Trieste Kelly-Dunn) that begins as a subtle character study but unexpectedly morphs into a full-on detective thriller. Working once again with cinematographer Andrew Reed, who maximizes the potential of the Red camera here, Katz uses a muted color palette, a slow-moving camera, and his own sharp editing to create a rising air of tension that boils over into the second half’s action-packed sequences. Cold Weather is a deft, original addition to the noir genre and is another impressive creative statement by the uber-talented Katz. Buy it on DVD

A Screaming Man (Film Movement) — For the first half of Mahamet-Saleh Haroun’s A Screaming Man, you might think Haroun’s sole mission is to deliver one of those poignant little personal fables that feel warmly contained within their own worlds. But something happens along the way. The news reports of civil unrest that filter through the background of so many early scenes maneuver their way into the forefront, to the point where the film’s scope widens dramatically. But here’s the trick, and it is what most likely resulted in its winning of the Grand Jury Prize at the 2010 Cannes Film Festival: Even as that external scope widens, A Screaming Man retains its small, personal, internal purpose. Haroun’s deft balancing act between an actual civil war and the civil war in one’s man mind is a quietly groundbreaking achievement. Read my full review, then buy it on DVD

My Dog Tulip (New Yorker Films) — If you aren’t a dog person— and if you aren’t a dog person how are you not a dog person?—Paul and Sandra Fierlinger’s My Dog Tulip might not send you running off to the animal shelter to snatch up a pooch of your very own, but it just might surprise you. An animated adaptation of J.R. Ackerley’s acclaimed memoir, My Dog Tulip tells the story of a middle-aged man who has felt his own lifelong aversion toward canines; yet later in life, when he inherits an Alsatian bitch named Tulip, he learns to love her as he’s never loved before. If that sounds overly schmaltzy, remember that Ackerley was an Englishman. Which is to say that even though there is cuteness on display in this sweet reminiscence, there is also mature wit and sentimental restraint. Read my full review, then buy it on DVD

or at Amazon Instant (RENT).

Eastbound & Down: The Complete Second Season (HBO) — Buy it on DVD

New/Old To Blu-ray Pick(s) of the Week

Eastbound & Down: The Complete First Season (HBO) — Buy it on Blu-ray

Better Off Dead (Paramount) — Buy it on Blu-ray

A Fistful of Dollars (MGM) — Buy it on Blu-ray

For A Few Dollars More (MGM) — Buy it on Blu-ray

The Magnificent Seven (MGM) — Buy it on Blu-ray

Have Not Seen But Really/Kinda/Sorta/Maybe/Wanna

The Music Never Stopped (Roadside Attractions) — Buy it on DVD

or at Amazon Instant (RENT).