As we work towards finalizing the details of  the new Hammer to Nail design (it’s coming, we promise!), we thought we’d try to focus even harder on achieving one of our site’s primary goals, which is to literally connect you, the reader, with HTN-approved films that you can watch much sooner than later. As in, right fuggin’ now. 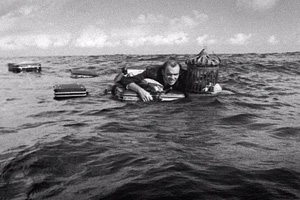 While it’s already quite obvious that we’re on the jock of the Zellner Bros., (see: exhibits A and B), this creative crush seems like an even better reason to kick off our new Monday Short Film Pick series with one of their finest hours (or should I say ‘finest five minutes’). For those of you who appreciate art, intelligence, and ambition in your independent cinema, yet who abhor self-importance and pretension to the max, Flotsam/Jetsam is a win-win situation. The genius in this short exists in the way that it casts a spell and will have you questioning where it’s headed (is this pretentious horsesh*t?), only to confirm, in a screamingly hilarious twist, that it is actually an on-the-level commentary mocking pretentious horsesh*t. Well done, Zellner Bros.!

Watch it for free ***right here*** at the Zellner Bros. website. It’s a great way to start the week and remind us all that a lot can be accomplished creatively in five short minutes (including five more minutes of worthwhile procrastination).

(NOTE: For those of you with your own yummy short films—that are viewable online—who want to be considered for the Monday Short Film Pick, please email a link and information to CLINK at HAMMERTONAIL dot COM.)