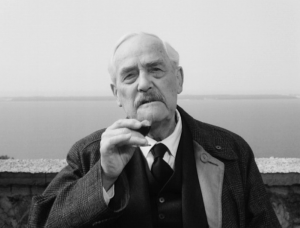 It may well be that Ingmar Bergman was and is the most overtly existential auteur of all. This is significant; Kurosawa, Truffaut, and Godard explored similar ideas but, where their philosophical pondering tends to be somewhat veiled, Bergman’s filmic expressions of the search for meaning (especially as it relates to faith) have a certain undisguised quality to them. His characters often cry out for answers, only to be met with silence. This is perhaps most evident in Wild Strawberries, Bergman’s immensely powerful (not to mention wholly depressing) meditation on old age and death. In the realm of typography, Helvetica occupies a similar role: as the documentary of the same name makes clear, the ubiquitous typeface is often considered a blank canvas whose meaning is defined almost entirely by the word, logo, or slogan it’s being used to spell out. The question of what makes a film (or anything else, for that matter) existential is likely to lead to navel-gazing, but suffice to say that both Wild Strawberries—with its elderly protagonist looking back on his life, trying to figure out what it added up to—and Helvetica—which, in having no inherent meaning of its own, is the ideal starting point for creating it—qualify.

The reason this is worth pointing out is simple: for many of the existentialists, the act of artistic creation can be seen as the ultimate act of self-assertion. No other intellectual movement blends the analytic (Kierkegaard, Nietzsche, Buber) with the fictional (Dostoevsky, Kafka, Camus) in quite the same way. Pairing a documentary with a narrative film thus makes perfect sense. The leap from—and joining together of—the worldly, fact-based representation of how things are which a documentary or essay offers to a fictional portrayal of those same principles in a work such as The Stranger or Wild Strawberries is a hallmark of the movement. For this reason, I’d actually suggest watching Helvetica first. Though the documentary itself doesn’t highlight the font’s existential air (that’s more of an implicit task left up to discerning viewers such as yourselves), it still lays the groundwork for Bergman’s more explicit take on the subject in much the same way that reading an essay before a novel would.