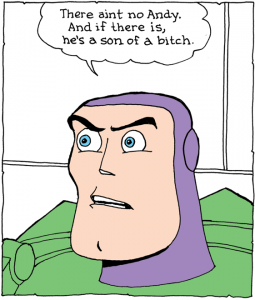 It was either prescient or simply a happy coincidence that, in 2007, a faux-comic strip surfaced online called Cormac McCarthy’s Toy Story 3 concerning the rape and pillage of lesser toys by Buzz Lightyear and Woody, the spaceman and sheriff, respectively, around whom the Toy Story universe revolves. The attack takes place in the room of the toys’ owner, Andy—presented in the strip as an absent god—and ends with the murder of Woody at the hands of his companion. The prose is austere yet evocative, the images a fitting blend of carnage and plastic. “You wear a star,” says the severed head of a troll doll at the height of the bloodshed, “but what law do you uphold?”

Needless to say, the humor arises from its juxtaposition of two very different fictional worlds. A survey of Cormac McCarthy’s blood-soaked tomes—which meander seamlessly between the southern gothic, western, and post-apocalyptic genres—reveals an exhaustive look at the nature of violence: its roots, its permanence. Whereas Toy Story is, seemingly, for kids. Except it’s not (at least not exclusively), and this aspect of Pixar’s oeuvre is part of what elevates the studio above the lion’s share of its peers. What first surprised me when I watched the latest (and presumably last) installment was the urgency of its premise. Here was a third film that not only worked but somehow seemed necessary: in retrospect, the question of what would become of these toys once their owner outgrew them seems always to have been there, a built-in plot device waiting to occur. The conflicts of the first two films (the introduction of a new toy, Woody’s theft by a collector) seem to pale in comparison to what has the unmistakable air of an endgame. What next struck me—and brought to mind the comic mentioned above—were the ways in which Pixar’s latest reminded me not of Ice Age or Shrek, but rather the Coen Brothers’ No Country for Old Men.

First consider the commonalities between Woody and No Country‘s Ed Tom Bell. It may seem fatuous to point out that both films’ protagonists are sheriffs, but the connections run deeper than that. Both men are in the twilight of their careers, a resignation setting in that seems certain to take hold; both see the world changing around them and are unable to change with it. The once-chipper Woody is now noticeably world-weary, his endurance tested by constantly having to guide those who look up to him with increasingly cynical eyes. Like Ed Tom, he has no choice but to put on a good face and internalize his woe to the extent possible. Too, they’re both outmatched by the inexorable forces they’ve come up against: Chigurh in No Country, Andy going to college in Toy Story 3. The former fancies himself an agent of fate—a living manifestation of the notion that, once set into motion, a chain of events must be seen through to its end—and the latter is simply a natural result of time’s passage. Which is to say that, really, the two are cut from the same cloth.

More than anything else, it’s time that the two men are up against. In Ed Tom’s case, the fact that Chigurh is too much to take on may be viewed at least in part as a consequence of this, while for Woody et al. the potential move to the attic is a long time coming. This sense of the passing of an era—made all the stronger in Toy Story 3 by the fact that it’s the conclusion of a beloved franchise—is, of course, a staple of the western genre, and both films give it a similar thematic treatment. That Woody is effectively ageless, however, allows him to start his own cycle anew, while Ed Tom is forced to hang up his spurs knowing he’s been bested. Where No Country shows the dolorous conclusion of a string of events, Toy Story 3 uses its own internal logic to create a happy (if bittersweet) ending to a trilogy. But the Coens imbue their film with such weight as to give it a similar feeling of the end of something meaningful, if not easily articulated. “It’s been traveling 22 years to get here,” Chigurh says when forcing a shopkeeper to call heads or tails on an old quarter. Time doesn’t stop; it simply takes a while to catch up to us sometimes.