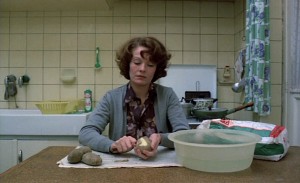 Before I remind the choir of these two films’ merits—and attempt to sway the skeptical—it should be noted that this suggestion is an exceptionally long and disturbing one; the combined running time is over five hours, two-thirds of which is Chantal Akerman’s Jeanne Dielman, 23, quai du Commerce, 1080 Bruxelles, and almost all of which is difficult to watch for one reason or another. (Whether the preceding is taken as a warning or a dare, I leave to you.) That said, this could make one hell of a Sunday afternoon for the intrepid among ye, especially any cinephiles of the glutton-for-punishment variety. But more than an endurance test or exercise in novelty, the pairing of Jeanne Dielman and Antichrist is genuinely intriguing to me in that it offers a glance at two sides of a particular coin: the former is regarded (among many other things) as a feminist indictment of our male-dominated society, while the latter has been accused of being part of the problem. Lars von Trier, artist though he is, has repeatedly gained the ire of critics whose apparently-delicate sensibilities have made them quick to label the Danish auteur a misogynist. (I don’t feel qualified to say whether this is a case of “where there’s smoke there’s fire” or a misunderstanding of von Trier’s intent, but I don’t think this film warrants the controversy it’s caused.) Still, Antichrist offers one moment—and anyone who’s seen the film knows of what I speak—of female-on-male violence that immediately brings to mind the climax (pun intended; I know, I’m an asshole) of Jeanne Dielman. Whether the two filmmakers set out with similar intentions is debatable, but the end results aren’t as oppositional as they might appear.

The primary commonality from which all others between the two films stem, however, is their different-but-similar portrayals of women in mourning. She in Antichrist has suffered the loss of her young son; Jeanne is a widow and a single mother. In a way their situations are reversed, but really they’re the same: their tragedies are the catalyst for haunting looks at grief. Von Trier disturbs us mainly by showing a woman whose woe has externalized itself in sexually violent ways, and Akerman’s heroine internalizes her pain to such an extent as to seem something of a zombie. And though Jeanne does, as mentioned, reach a similar breaking point, it’s watching her get there—peeling potatoes (oh, those potatoes) for minutes on end, staring blankly while seated in a chair, knitting a sweater—that truly unsettles. Both women are mothers, but it’s their similar embodiments of woe that make them of a kind.