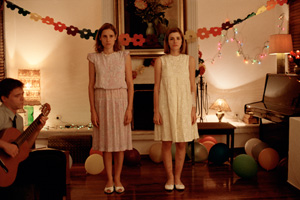 Aside from the obvious—sequestered filial oddity; country estates; and cats, too many to count in Grey Gardens and a very memorable one in Dogtooth—these two films complement each other in a very particular way that warrants mention: Both are presented so plainly and with so little outside frame of reference that the decidedly strange goings-on of each house begin to feel normal. That the direct cinema approach of Grey Gardens entails no voice-over narration on the part of documentarians Albert and David Maysles allows the two Edies to tell things their own way, and their bizarre worldviews—which seem, at least in part, a result of their relative isolation from anyone but each other—take on a consistent internal logic. So, too, do the just-as-strange habits and beliefs of the nameless Greek family in Dogtooth, who bark like dogs to scare off potential cats, rattle off wildly inaccurate definitions of common words (zombie = a small yellow flower; motorway = a strong wind), and listen to Frank Sinatra under the impression that the man singing in a language they don’t understand is their grandfather. What’s more, the father acts as translator and informs his children that the lyrics to “Fly Me to the Moon” are about honoring thy mother and thy father, sans the religious connotation. Family above all else indeed and, what’s more, the two films’ bizarre closed systems function well enough until intrusions from the strange, hostile outside world put them in jeopardy. This comes in the form of newspaper articles lamenting the disrepair of the titular estate in Grey Gardens and—egads—pop culture in Dogtooth.

Clues by which to glean the latent meaning of these two films are few and far between, and herein lies the ultimate intrigue (and fun): Each is so wonderfully off-putting as to not require a satisfying, catch-all explanation. They function as puzzles whose final pieces must be supplied by the viewer; there aren’t answers so much as there are guesses. Were this not the case, the effect of the two films would be lessened rather than enhanced. To call them oblique is an understatement but, in their own way, both Grey Gardens and Dogtooth act as fitful reminders of the inherent danger—and, in the latter, humor—of narrowing the lens through which we view the world. That only one of them is fictional (and thank god it’s Dogtooth) somehow adds an encouraging note to an unintentional diptych that is otherwise as disturbing as it is dispiriting.