(The 2015 Seattle International Film Festival started May 14 and runs all the way until June 7. Keep an eye on HtN for several reviews like this one, the latest from filmmaker Rodney Ascher).

You’re in bed. Just as you drift off, you hear a buzzing sound. Some creepy voices. Maybe you’ve just felt an electric shock. Whatever the signal, you know what’s coming. You can’t move a muscle or shout for help. All you can do is watch as horrifying, shadowy figures stand before you. You don’t know what they’re after, but you’re pretty sure it isn’t a game of checkers.

The Nightmare explores the lives of eight people who have been victims of sleep paralysis for many years. Approximately 7.6% of people will experience some form of this phenomenon in their lifetime. It’s not physically damaging, but recurring incidents certainly do a number on your psyche. The research and treatments are limited. The strangest thing about it is the similarities within the sufferers’ visions. For some, it began in infancy or childhood, and their recurring visions are also their first memory. The eight hale from vastly different backgrounds, but they all know the terror that awaits them, in some cases, every night of their lives. For most, it starts with a buzzing sound and the awareness that they are no longer able to move or speak. In many cases, it leads to the measured advance of a three-dimensional shadow man or men. There’s always a figure of evil involved.

Director, Rodney Ascher’s (Room 237) truly unique documentary eschews facts and medical justification to make room for thorough accounts of what exactly happens to the sufferers, how it has affected their lives, and what their condition means to them on an existential level. And that’s not even the most unique thing about the film.

It’s difficult to accurately convey the horror of your nightmares to another person. One of the subjects attempts to draw the figures from his dreams and he’s frustrated by how innocuous and non-threatening they look. But Ascher, perhaps because he’s a sufferer himself, manages to recreate the images in a truly horrific way, like some kind of oneiric sketch artist. These reenactments set the tone, clueing the audience in on why these people are so haunted and broken. 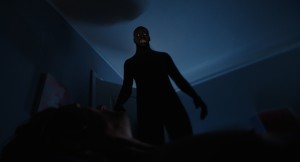 Ascher also makes an artistic decision to show the seams of his film with intentional behind-the-scenes glimpses during interviews and reenactments alike. You see part of the cameraman in the mirror as a subject sits near the doorway of one room, with Ascher seated on the other side of the doorframe, asking questions. One of the ghouls does a quick costume change between hauntings, and the camera follows him through the set to the next victim. It’s a clever gimmick, like purposefully visible stitches on an organic cotton shirt. But it also helps pull you out of the nightmare-scape that is the lives of these people, and leaves you in the space between consciousnesss.

The Nightmare is a tremendously successful film on many levels. It’s unique and artistic, as with the aforementioned self-consciousness, plus a moody score by Jonathan Snipes and floating, dreamlike cinematography by Bridger Neilson. Ascher manages to impart some truly unforgettable images. It’s understandable why the victims have made their respective life choices in light of them. They’ve turned to Jesus or considered suicide. One man suggests sleep paralysis as a root for alien abduction stories. One man is convinced that it will one day be the cause of his death. They have difficulty maintaining romantic relationships and holding down jobs. One man believes that just talking about them makes them happen more and that he has passed it on to others by describing it to them.

The film is informative – but in an atmospheric way – showing recurring examples of sleep paralysis nightmares in animated sequences and film clips as well as historical art. It has so many things going for it, that the ending, which arrives abruptly after a seemingly inconclusive interview, is a bit of a letdown. I’m all for breaking tradition in narrative structure, but movies, particularly documentaries, still need to draw some sort of conclusion, be it definitive or open-ended. The Nightmare ends with the distinctly unsatisfying feeling of waking up from an interesting dream before it’s had the chance to run its course.