Masked women ride towards the camera, eyes unflinching, brown skin and fixed stares recalling “bandidos” – in this case, “bandidas” – of Hollywood Westerns. Except here they ride on bicycles, their black bandanas are emblazoned with fallopian tubes, and they are not, in fact, faceless villains. It’s a dual reclamation: women moving into the foreground; people of color making the heretofore negative a positive. The Ovarian Psycos – a self-proclaimed “all-women-of-color cycling brigade” – are here to make the world rethink its attitude towards women (specifically, women of color), and they won’t accept anything less than their rightful place in society.

When we meet them, their founder and leader is one Xela De La X, a rapper and advocate for at-risk youth (who become at-risk adults, as she eloquently puts it). After a difficult childhood of her own, she is now determined to open up opportunities for her daughter that she, herself, never had. The Ovarian Psycos gather for frequent “luna rides,” where they cycle the streets of East Los Angeles, defying the danger and chaos that keep so many of their peers at home, afraid. We are constantly reminded, through their words and through breaking new stories, of the risks that women face in this world. As the ending title card tells us, “1 in 3 women will experience physical and/or sexual violence in their lifetime.” The goal of these activist women is to push back against this statistic and offer a supportive (and combative, rightly so) community for their peers. It’s a worthy and needed plan of attack. 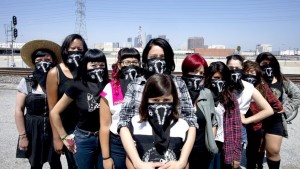 The filmmakers – Joanna Sokolowski (Still Time) and Kate Trumbull-LaValle (Abaayo/Sister) – in their feature-documentary directing debut, do a fine job profiling the group. The film does them and their cause ample justice, and is beautifully photographed, as well (the images of the women riding in formation are terrific). Unfortunately, because the film is overall so powerful, the few less-than-perfect moments stand out. The choice to include only one male interviewee – a guy who doesn’t understand the Ovarian Psycos’ protest – as an example of the obstacles that face the women feels like a cheap trick. Yes, he’s an idiot and a jerk, but a greater range of opinion from the brutish sex might have made the film even stronger. And at the end, when a main character suddenly doesn’t participate in a major cycling event, and we see her walking away without supporting footage, it feels like a missed opportunity. But these are minor complaints in what is otherwise a wonderful tribute to a marvelous and brave group of women.