For about a decade now, Frank V. Ross has been one of independent film’s most perceptive artists. His films are small and unassuming, his characters very much like the people we come across in our daily lives. This is of course territory explored by many filmmakers, but what sets Ross apart is his keen insight. He understands people, and through his films we gain a little bit of understanding as well. In this respect, he stands alongside two other great filmmakers who have made the business of the everyday their business, Mike Leigh and John Cassavetes. To say he warrants being mentioned in the same breath as that pair may be hyperbole, but he’s on his way.

Bloomin Mud Shuffle follows along the bell curve of a brief relationship, from its promising beginnings to its eventual and underwhelming end. It’s a theme Ross explored previously in Present Company (2008), which featured a dissolving young marriage and a whole lot of vitriol between its two leads. Bloomin’s characters are far less hostile, and it is more difficult to point to any concrete thing responsible for the break up. 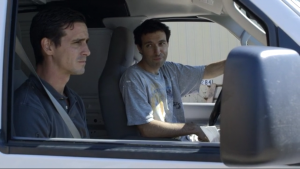 Lonnie (James Ransone) works at a painting company with his best friend Chuck (Alex Karpovksy) and begins seeing Monica (Alexia Rasmussen), the company’s receptionist, outside of work. Lonnie is in his mid-thirties, and spends much of his time at home alone drinking Vodka and playing online video games. That he is an alcoholic is a sign that things may not go well for him and Monica, although he hides it from almost everyone who knows him, and he even gives up smoking once he starts seeing her. Despite his vices, he’s genuinely trying to improve his life. News that an old friend has recently committed suicide comes as a wake up call of sorts.

Like all of Ross’s films, Bloomin lacks anything resembling a plot, yet every single scene has a point, and we feel Ross’s confidence at every turn (at 75 minutes, the film is very lean). Lonnie and Monica’s relationship is treated elliptically, partly because that’s how Ross works, but also because theirs is literally an elliptical relationship. Monica inconveniently lives a train ride away from Lonnie, and we see as much of them apart than we do together. What Ross shows of their relationship consists of moments that rarely make it into movies, but which sting with familiarity.

Bloomin Mud Shuffle is Ross’s first film with a full cast of professional actors (James Ransone is known for having played Ziggy in the second season of The Wire, and Karpovsky is best known for HBO’s Girls), and for a film that will probably be his most seen to date, it is one of his most modest efforts. But Ross makes actor-centric cinema, and the attention to the details of each character’s routines and behaviors may look easy, but it’s clearly not, especially when so few of his contemporaries achieve such pitch perfect results.