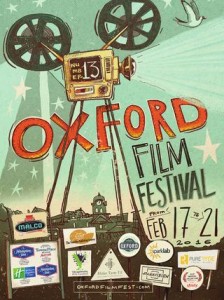 During a recent conversation at the 2016 Oxford Film Festival (which ran February 17-21 in Oxford, MS) I was chatting with someone about how many years I’d been coming to the festival. I know I showed my doc Worst in Show there in 2011 and after that, I tended to switch off attending with my then editor Mark Bell of the now defunct Film Threat so maybe this was my fourth Oxford Film Fest? I honestly can’t remember and the point of all this is that, it doesn’t really matter. What does matter is that each and every year the Oxford Film Festival steps it up just a little bit and as a result, it truly gets better each time. This year had some big changes which I’ll get to later but here’s my week in a nutshell. (Delicious food and fun parties redacted to seem more professional. But both were awesome!)

I arrived a bit early this year as last year, I felt like I got in too late and left too early. Plus, this is my favorite regional film festival and I have many friends in and around Oxford and Memphis (which is the airport you fly into) so a little more time in my beloved south is never a bad thing. Plus I had a very cool opportunity to speak to a class on filmmaking at Ole Miss which was something I’m keen to do as I’m looking to start teaching at a university in the fall. So, I got in late Tuesday night and hit the sack in order to seem prepared for a 9:00 am class.

Although I’ve spent a lot of time in Oxford, I’ve never had the opportunity to check out the Ole Miss campus. While my peek was indeed quick this time around the campus had a great old-time feel with giant, classic university buildings. The class I was speaking to was an advanced filmmaking class and it only had 12 students which I think is pretty cool. Their assignment that semester was to make one “longer” short film or two “short” short films so I used my time there to talk to them about what they should consider doing after completing their short film. I told them all the usual ideas about how you’re probably never going to make a dime off your short but it can be used as a calling card to get you into film festivals where you begin networking and building up a reputation. One in which you’re known as a nice and talented person, not a pushy, arrogant asshole. I thought it went well. 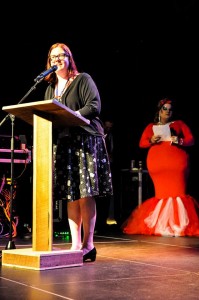 Although the class was small and apparently the program is a fledgling one, I also made it clear to the students that they’re in an ideal situation to learn the craft of filmmaking. Ole Miss is really putting together a great set-up of instructors as well as equipment and it’s easy for qualified students to access the gear. Colleges that are more well known for their film programs are typically impacted and it can be incredibly hard to get your hands on a camera to create anything. I think there’s a very solid support system for filmmakers at Ole Miss and the area is extremely supportive as well. Case in point…

While at the fest, I attended a panel that talked about producing films in Mississippi. I live tweeted the particulars but two things really leapt out at me. First off, Mississippi offers a 25-35% (various factors figure in) rebate on money spent shooting your film in Mississippi, with a $50,000 minimum spend. A rebate means that once you wrap production and all your receipts are in order, you get that percentage back immediately. Other states require you to wait until tax season rolls around as well as some other rules but Mississippi will pay you back almost immediately. The other thing that both the panel and the audience agreed on is that the people in the various communities really, really want you to shoot your film there. People are supportive, friendly and helpful. The Mississippi Film Office is also going above and beyond to support filmmakers with a database of crew, a deep understanding of locations and legal advice on making sure your paperwork is correct to get your rebate. While many states are tightening their regulations or giving all their money to one or two large productions, Mississippi is really trying to lure people across state lines from Louisiana and Georgia. If you’re looking to shoot in the south and want to be somewhere where you’re wanted, check out Mississippi.

As I just realized I neglected to mention, I was invited to the Oxford Film Festival as a juror for the documentary features as well as a panelist and panel moderator. The panel I was on regarded “How to Get Film Critics to Review Your Film” and featured me as well as John Wildman who is a fantastic PR rep and was also the moderator, Edward Douglas, Eric D. Snider and PR rep slash writer Mark Rabinowitz. I felt the panel was a good one although the overlying message in answer to how to get us to review your film was “make a good film and get into a lot of festivals.” Sad but true. I also moderated a panel on “Voicing Animation” featuring HtN Winter Shorts Contest Judge and Emmy Award winning head writer of Adventure Time Kent Osborne as well as local Oxford writer and fellow Adventure Time writer Jack Pendarvis. The panel also had industry pro actress and voice-over vet Susan Hickman and Shreveport animator John Durbin of Moonbot Studios which is blowing up right now. It was a fun panel even though it took place at 11:00 am following the biggest bash of the fest. Ouch. 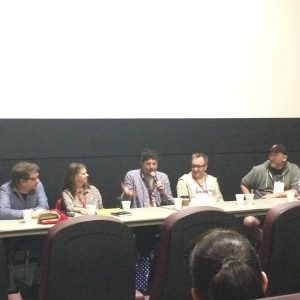 To be honest, I really didn’t see many movies at the festival. Much of my time was spent wandering around and hanging out with friends. I know you’re probably thinking that it seems ridiculous to attend a film festival and not see a lot of movies but to be honest, Oxford is a place I go to network, mix, mingle and hang out as well as recharge my creative juices. I get to see all of the films in whatever section I’m on a jury for and then it’s kind of catch-as-catch-can for me. One film I saw was my old buddy Mark Potts’ latest Spaghettiman. I’ve known Mark for years so it was great to catch up and see his film which is ridiculously silly but also fun. I even did the Q&A after which was a hoot. 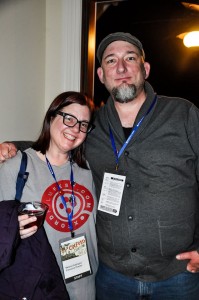 Myself and OFF Executive Director Melanie Addington

Earlier I mentioned there were some big changes and probably the biggest is that long time festival coordinator Melanie Addington was named Executive Director of the fest. This is huge and there’s literally not a better person that they could have hired. Melanie knows independent film and how film festivals work. She’s put her face out there for years for little to no pay and has really become the smiling face of the Oxford Film Festival. For long time supporters of OFF and of Melanie, it was really cool to see her finally get the reigns to run the festival as Executive Director. Although there was all sorts of behind the scenes wrangling she did, I think the best move she made was adding more screening venues and thus, more movies.

Oxford isn’t a big town but the entire community really shows up for films. While I’ve never heard complaints of people not being able to get into screenings, I think it’s smart to get new venues going. It takes time for people who are regular attendees to figure out where to go so getting that going now was key. Another cool addition was a Virtual Reality area which I had the pleasure of finally trying and I’ll tell you what, VR is legit! I don’t know how well it will ever transfer to the world of cinema but the four VR “trips,” “experiences” or whatever you call them that I tried were extremely cool. Annapurna Pictures produced one of them so you know if Megan Ellison is getting behind this, you’d be wise to do the same.

One issue the Oxford Film Fest has (and it’s one I’ve brought up before) is that it’s stationed at a really funky time in terms of the film festival circuit. It takes place a few weeks after Sundance and a few weeks before SXSW thus placing it in this kind of weird festival dead zone where filmmakers are reticent to submit and play because they’re holding on for a “bigger” fest. Also, since the fest is in February, bigger and more popular movies that played Sundance, Toronto, SXSW and others the year before have already earned distribution or it’s forthcoming so they can’t play Oxford. It’s really a conundrum and I feel the fest needs to change dates. However Oxford has other large events and their insane college football season which makes some dates impossible and summer is too deathly hot and humid. It is, as they say, quite a pickle and I’m not sure what the fest should do to help this along. 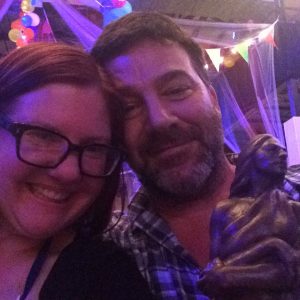 OFF Executive Director Melanie Addington and THE Robert Longstreet. And his Hoka award.

Another highlight of the fest was actor Robert Longstreet receiving the Lisa Blount Acting Award. If you’ve spent any time watching indie films (big and small) over the past few years, you’ve seen and loved Robert Longstreet. With good reason: he’s amazing! Some of his films include our own Michael Tully’s films Septien and Ping Pong Summer, David Lowery’s Ain’t Them Bodies Saints, Jeff Nichols’ Take Shelter, Todd Rohal’s Catechism Cataclysm and Nature Calls as well as the lead role in the upcoming (and fantastic!) A.D. Calvo’s The Missing Girl (which played the fest) and our winter short contest winner Vincent. I’ve never had the pleasure of meeting Robert but once I did I was happy to find out he’s as sweet, smart and fun as I had hoped. Kudos to Oxford for awarding such a great and talented guy!

Overall and as always, the Oxford Film Festival was fun and invigorating for creative types. The fest reminds me of other small, regional fests as they started in seemingly non-cinematic areas and became go-to fests for filmmakers such as Sarasota or Sidewalk (Birmingham, AL). These fests treat filmmakers and guests great and while yes, you probably will not get your movie picked up for distribution out of Oxford, you will meet new people who share similar interests and you’ll find a community who turn out en masse to see your film. As you plan your film festival schedule as a filmmaker, writer or enthusiast, add Oxford to your list. You won’t be sorry.