Ah, Anthony Weiner! Once a rising star, now and forever a raunchy punch line. Could you have picked a scandal more likely to resonate with your surname? For those who have already forgotten, Mr. Weiner (b. 1964) was, from 1998 to 2011, a Democratic member of the U.S. House of Representatives, from New York’s 9th congressional district (serving parts of Brooklyn and Queens). As such, he was known for his aggressive antagonism towards his Republican colleagues, which made him very popular among Democrats during the George W. Bush years, as well as after the 2010 midterm elections, when the House of Representatives flipped back over to the Republicans. Still relatively young at the dawn of this millennium’s second decade, he married Huma Abedin – Hillary Clinton’s close aide and confidante – in 2010, and together they seemed to make the perfect power couple. But then…oh, no, say it ain’t so, Weiner…he texted – actually, “sexted” is the proper term – a photo of his bulging underwear-clad crotch to an admirer on Twitter, and so initiated “Weinergate,” which resulted in his eventual resignation. It turned out there were many more women to whom he had sent lewd pictures, and even his most ardent admirers eventually became too disgusted to support him.

Two years later, after a fair amount of therapy and marital counseling, plus the birth of a son (Abedin was pregnant during the scandal), Weiner was ready to rise, phoenix-like, once more, using New York’s mayoral contest as his redemptive vehicle. He had run before, in 2005, before settling down to his successful congressional career. Just as he was getting ready to announce his intentions, he was approached by two filmmakers, Josh Kriegman and Elyse Steinberg – who had mainly produced films, previously – about having a documentary made about his life and career. Kriegman had worked for Weiner on his 2005 campaign for mayor, and later as his New York Chief of Staff, so they had history. Who knows why Weiner agreed to allow a film crew to follow him around as he launched what seemed like a long-shot bid, but we, the audience of this terrific new movie, should be forever grateful that he did. Thanks to that access, as well as hard work and no small amount of craft, Kriegman and Steinberg have created a mind-blowing look at a campaign in process, rising progress, and then stunning collapse. Because, you see, Weiner hadn’t really learned anything from the first scandal.

That’s right, after managing to convince a sizeable portion of the Democratic electorate in New York City that he had moved beyond the salacious stupidity of his past, Weiner went from phoenix to ouroboros (except that it wasn’t his tail that he was eating…) after revelations that he had continued his bad online behavior well beyond the original timeline. And we are there, watching him sweat and stammer through the embarrassment of it all. We watch his wife, and kid, and campaign staff, as well, in amazingly close proximity. It is almost unbelievable that no one thought to kick the crew out of any of the many tense meetings – including the domestic ones – that followed the new revelations. 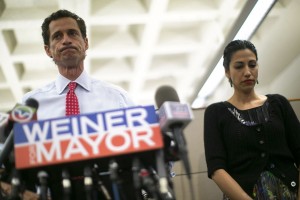 As riveting as the film may be, it is also profoundly sad, for in spite of his inability to control his cybersexual urges, Mr. Weiner comes across as more than just a narcissistic jerk. His ability to articulate his strongly progressive political views is as impressive as is his ability to undo it all from a lack of impulse control. Interspersed throughout the movie are bits from a post-mortem talking-head interview shot long after the end of the campaign, and in that interview Weiner is thoughtful and moving in his analysis of why he self-immolated, leaving himself consumed by, rather than risen from, the ashes of his life. Much like another disgraced politician, Eliot Spitzer – so eloquent about his own fall from grace in Alex Gibney’s brilliant 2010 Client 9: The Rise and Fall of Eliot Spitzer – Weiner, thanks to his starring role in this must-see 2016 documentary, leaves us simultaneously disgusted and bereft, wondering at what might have been. See it, laugh, cringe and weep.