WE NEED TO TALK ABOUT KEVIN

(We Need to Talk About Kevin is now available on DVD

through Oscilloscope. It premiered at Cannes and was released theatrically in NYC and LA on December 9, 2011. Go here to learn more.)

A mass of writhing bodies covered in red. They’re dancing, cavorting, losing themselves in almost orgiastic revelry. Suddenly they pick up one of their own—it’s Tilda!—and hoist her over their tomato-covered shoulders. The scene then dissolves into a room covered in red of a different sort, and the dreamer of this unsettling dream is thrust back into waking life. This Dionysian trance of an opening sequence is a vision of the night during Spain’s El Tomatino festival on which We Need to Talk About Kevin‘s namesake was conceived, we’ll soon learn, which is why it’s the moment to which our heroine Eva so often returns. Eva is unstuck in her own subconscious, drifting hither and thither, and so it’s appropriate, this presentation of her hallucinatory memory as an unwelcome night terror: Lynne Ramsay’s third film is itself something like a restless dream, one in which the only prospect more frightful than moving onward is waking up and attempting to piece it all together. Ramsay shows, as much if not more than she did in her first two efforts, an uncanny ability to turn passing moments of seeming mundanity into drawn-out scenes soaked in utter tension and resentment. The senselessness of her film’s central setpiece is something from which it’s obviously quite taxing to try and derive any meaning, but within that epistemological no man’s land there’s no shortage of striking imagery and emotional pondering in which to (un)comfortably drift. Ramsay’s latest is excellent in its own way, even if what it’s best at is making us feel awful—about these characters, about their world.

We Need to Talk About Kevin is no less phantasmagorical than the similarly hallucinatory Morvern Callar, but with higher stakes. Tension—which is constant—is frequently announced sonically via high-pitched white noise and rumbling bass or, more often, through the color red: paint splattered on Eva’s window, stack upon stack of tomato soup. A harbinger as much as a hue, it’s a constant signifier of dread, confusion, and memories both beautiful and traumatic. This is a dense, overwhelming environment rife with stylistic flourishes doubling as sensory cues. The colors may not be monochrome, but the mood certainly is: deep unease. Nearly all of this is produced by the eponymous character. Kevin is shown to be cold, withdrawn, and perhaps even fundamentally evil from the earliest age, either in spite of or because of the happy conditions in which he’s brought up. Eva and her husband Franklin dote on the boy, but from the moment we first see his dead eyes there’s never any question as to whether nurture or nature will win out. “Mommy was happy before little Kevin came along, you know that?” Eva says to the already-troubled (and troubling) child when he’s too little to understand her words. He may not know how to vocalize it yet, but the feeling is clearly reciprocated. 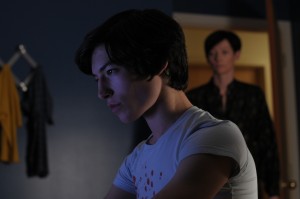 What most matters here is what isn’t talked about, what isn’t disclosed. Like the absent motivation for the unspeakable act toward which the film slowly builds even after it’s made plain what it is, we’re never quite sure how things reach such a low point. Kevin may be a soulless monster, but the reason he’s allowed to continue down this path is because everyone in a position to stop him from further acting out has either had the wool pulled over his or her eyes (Franklin) or is at a loss in terms of how to reach him (Eva). She tries occasionally, but he simply refuses to see it. Ramsay is so intentionally disorienting, at times even punishing, that seeing all this through Eva’s eyes is no less difficult than seeing it through our own. The result is somewhere between nightmare, delusion, and projection—we’re as fraught with tension as our heroine is. The film is so stubborn in its refusal to answer or even speculate as to why this is happening, why Kevin is the way he is, that it’s bound to frustrate. Yet looking past—or even embracing—the fact that We Need to Talk About Kevin asks far more than it answers allows one to find a certain serenity amidst the tumult. The sum of all the loathing Kevin inspires is so hollow and dispiriting as to be damning were it not graceful in its own way. Death has always been everywhere in Ramsay’s films (as have troubled parent-child relationships), but before it was a sort of slow, even peaceful, passing. Here there’s a violence to even the most everyday activity that makes the lulls just as frightfully compelling as the moments from which we’re tempted to avert our eyes.

Even so, the film provokes such overwhelming unease and disgust (most all of it either due to, or directed at, Kevin himself) that it’s far from an enjoyable experience even if it is at times enthralling. Semi-cathartic last scene included, it constantly balks at the very idea of making its designs known–or whether what’s there is even worth finding. Ultimately the weight lies less on our shoulders and more on Eva’s. A sort of martyr, she takes it upon herself to bear the responsibility for something she hasn’t done. In taking on this burden, she’s rendered incapable of moving on with her life. Even if anybody else would let her, her mind wouldn’t.