WAKE ME WHEN I LEAVE

(Tyler Rubenfeld’s Wake Me When I Leave has been perplexing audiences with its audacious use of surrealism and horror tropes. The film is just now making the rounds and is playing in New York Friday, March 4 at Kinoscope.)

Tyler Rubenfeld’s Wake Me When I Leave shares similar goals as many contemporary naturalistic indie films, but approaches its themes through an oblique style and fragmentary narrative. There is no lack of realist works in the world of independent film, but it is a rare thing when surrealism is used toward the ends of realism. This may sound like nothing new — after all, surrealist works are often at their core about universal human themes, the kinds of things we encounter in our day-to-day lives. Rubenfeld’s film never falls into the puzzle film trap, and denies the viewer the kind of intellectual epiphanies often intrinsic to such films. Instead, we’re left without answers, only questions, and the film’s achievement is that it consistently fascinates for its hour-long duration.

The film focuses on the relationship between its two leads, Jill (Jenna D’Angelo) and Todd (Michael Fentin), who have been together long enough to be used to each other, but when they are robbed on the street, Jill begins to reassess the origins of their relationship through memories, dreams, nightmares, and perhaps even hallucinations. Jill remembers the night she and Todd first met at a friend’s party, in the middle of a breakup fight via text, which prompts her to get drunk enough to forget the encounter entirely, until they meet again at the coffee shop where Todd works.

To summarize further would do Rubenfeld’s film a disservice. While there is nothing uncommon about Wake Me When I Leave’s lack of plot, its fragmented narrative unfolds in such a way as to preclude any sort of rational analysis. What the film isn’t — I hope, at least — is the type where the viewer simply interprets what appear to be symbols and snap the resulting puzzle pieces into place. There isn’t an easy way to access the film’s meaning — we can’t simply attribute it to Jill being insane, for example — and instead we’re forced to make some sort of emotional sense of what we’re shown. 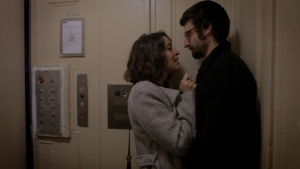 It is difficult to say why this film works. It could be possibly due to the characters’ fears being the familiar, everyday ones we know so well. Or perhaps it is because Rubenfeld’s leads do such a good job being the type of people we run across so often. For all the surrealism, they are recognizable. The film’s final scene may be a key to understanding the film as a whole: the couple shares a silent breakfast together, the same kind they probably share every morning, as if to say here is reality, and everything that preceded this moment was merely an imposed narrative, Jill’s maybe. That seems terribly inadequate, but one thing about the film — only an hour in length — is that it makes us eager to watch it again, if only to gain just a little bit of clarity.