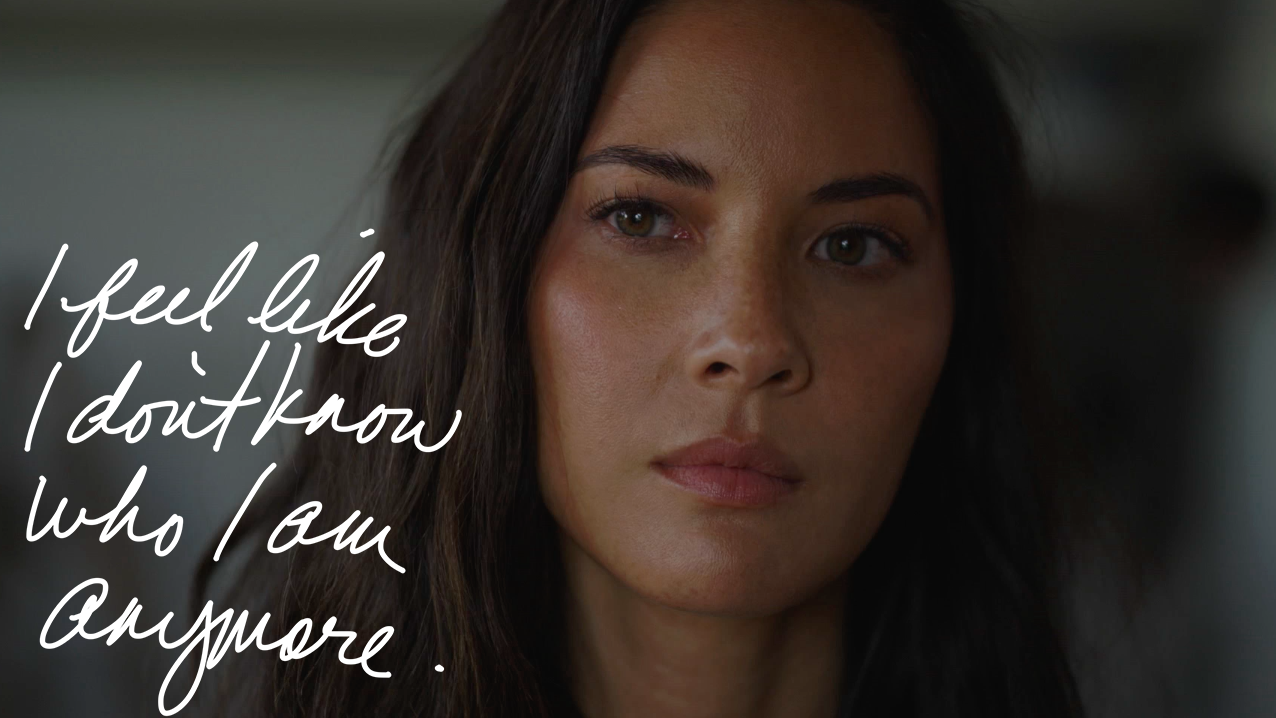 Hollywood loves a story about Hollywood, so why doesn’t Hollywood or at least the combined critics of Hollywood love Violet, Justine Bateman’s directorial debut? I’m writing this review from the perspective of a week after SXSW after the 40+ films spun in my brain and battled for that vaunted spot of ‘best film.’ Still even ten days later the Olivia Munn starring film about a Hollywood development executive who finally stops paying attention to the committee in her head is the best thing I saw.

Before I sat down to write this, I took a glance at some other reviews, not to steal opinions, but just because I have a hard time remembering which actors played which roles. I did not expect many of the entrenched LA-based male critics to get it. Peter Debruge from Variety calls it uncomfortable and “at times-suffocating” – as if that wasn’t the point – and criticizes the lead character for burning bridges back to sexual assault and disrespecting toxic parents. Tim Grierson from Screen Daily warns “this self-help tale may turn off those with little patience for therapy-speak” and spends as much time discussing the male side character Red as Violet. Travis Hopson from Punch Drunk Critics wants to argue with the conceit of the film, “it’s a distraction, and too often an obtrusion into genuinely affecting scenes that need to stand on their own,” as if the distraction was not the central goal of the conceit. I went down a rabbit hole on this one, a film that I thought was pure perfection. I think I read every review published. Countless reviews I read by male critics took issue with Bateman breaking the rules of filmmaking ‘show don’t tell.’

Female critics (and thank God some of them got assigned this film) seem to get it, although their end result is little different. Kate Erbland from Indiewire wrote an entirely positive review (I’ve re-read several times) and yet scores the film a B-. Her sole criticism of the film seems to be that Violet is so White, and that it should have made use of Oliva Munn being half-Chinese. It’s a little like the voice in your head telling you ‘not good enough.’ Sheri Linden from Hollywood Reporter has a hard time relating to the title character of the film, disbelieving there is anyone in Hollywood who has never gone to therapy and not finding her new choices (blowing up her career) ‘brave enough’ because she lands in the arms of a cute guy. This criticism again feels like an inner voice picking fights to put a success down.

So why didn’t they get it? Violet confesses to her best friend that she hears a committee of voices in her head but is powerless to overcome them. Every review speaks to the universal truth of that, yet no one wants to admit how accurately Bateman nails that push and pull from those internal specters that either tear you down or make you second guess every choice. Justin Theroux’s Voice batters Olivia Munn’s Violet with dictatorial directions, piercing insults, and the occasional call back to her childhood, like the repetitious motif of calling out “you’re such a baby.” Meanwhile, cursive script fills the screen with her inner voice: “why can’t I be happy,” “don’t make a scene,” and “what’s wrong with me.” Adding to the onslaught is the series of images – decaying animals and such – that flash on the screen, or the gradual dip to red that overwhelms the picture, all devices Bateman uses to pummel her lead character. The Voice seems to have developed in order to keep Violet on track for the career she thinks she wants. Like after a particularly bad day at work when the Violet comes home to her hottie-roommate Red and the handwriting admits “I want to tell you everything” and The Voice shouts “Stop!” Even the cursive agrees later saying Red (played by Luke Bracey) is not “the type of guy I should be dating.” Violet refers to the Theroux in her head as “the voice that tells you you’re a piece of shit.”

Do none of the other reviewers have that voice? I doubt it. To me it seems far more likely that their own internal voices might be keeping them from acknowledging how Bateman absolutely killed it with this film, especially in Hollywood, where everything is driven by self-image and bravado. To me, Violet captures the combat we face with every decision. And sure, it might be just be who to date, what to order, or what shirt to wear, but the exhaustion of the constant internal tussle is grueling. It’s easier to give into the voices and make the safe choice.

I love this film. Munn’s virtuoso performance captures both the current gunfire on the front, and the deep scars from the wars of yesterday. Yes, Bracey’s Red is near perfect, but we don’t see/hear the voices in his head, what kept him from making a move on Violet? And the pure satisfaction of Violet calling out her boss in front of the whole office, that was just as cathartic for me watching it as the character. Few films get emotional reality correct, and this film, which has that at its center, may get it a little too correct for some viewers. Maybe they need to fight the voices in their head.