Fb. In. Tw. Be.
Coming of Age
Drama
Latest Reviews
On the Festival Circuit
Reviews

(Violet is the writing/directing debut from Bas Devos. It made it’s debut as part of the New Directors/New Films showcase at the Film Society Lincoln Center)

Violet has arguably one of the best opening shots of 2014/2015 that won’t let go once the frame is established. CCTV monitors hum to life at a mall as a crumpled security guard watches the monitors that don’t specify where it’s early or late, and two kids standing around. Two different kids appear after the guard steps out. They confront each other, but one pairing results in Jesse (Cesar De Sutter) watching his friend Jonas bleed to death next to his bicycle. It’s a sentiment that writer-director Bas Devos continues to pick at throughout the unfolding days.

Watching the acceptance and guilt of Jesse tends to evoke comparisons with Gus Van Sant’s Paranoid Park. Jesse doesn’t say much but lets everything surge up when rage or depression overwhelm his stoicism. Even then, he’s quiet due to shock and almost mute because of it.  But there are equal shades of Helen, a 2008 film by Joe Lawlor and Christine Molloy, that centers on an equally quiet girl asked to portray a missing classmate in a re-enactment. De Sutter’s Jesse later returns to the shopping arcade in a single take, the camera circling to give him moments of privacy while trying to find a reasonable way to accept the situation. 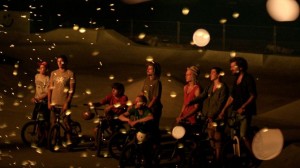 Violet is light on dialogue, making it count in specific beats when after a day of BMX riding a kid waits until everyone is gone to let Jesse know he considers him a coward for not helping Jonas. It’s stark compared to earlier when the same crew came to Jesse’s house to check on him and go for a ride around the neighborhood. Devos’ camera follows them from behind (there’s your Van Sant) and once they turn around takes them head-on.

Staring down the events and the aftermath are an ongoing point in Violet with the choice to ignore exposition. Ominously, a hooded black figure watches Jonas’ family eat dinner from outside as lights pop on from room to room to show their progression. Earlier that same figure watches a memorial walk for Jonas, without a clue until later whether it’s Jesse, the killer or just a kid taking a break.

Devos’ choice to use warm hues and fuzzy glows, as if in-between each glimpse into Jesse’s day is like flipping channels on television. Jesse knows something is wrong and can’t bring the words out. Even when he visits Jonas’ father, a simple ask for coffee turns into a grief-stricken kiss from the father. It’s not paternal or emotional, just an attempt to channel his shared, wordless grief.

The closing single-take shot is incredibly striking, since its suggested cause is a dark method of coping with the loss of a friend and child. But also redemptive, as Jesse’s father shields him from having to look back at the past. Don’t expect much though if you need it spelled out for you.