Autobiography as lyrical portrait, Wojciech Staroń’s Two Lessons is a quietly moving and deeply beautiful nonfiction diptych. Built on exquisite observations in 16mm film, wise in its gaze and gently loving in its disposition, the film is almost elemental in its directness and simplicity. Taken separately, the two award-winning films that make up the program—1998’s Siberian Lesson and 2011’s Argentinian Lesson—are subtly devastating achievements, little monuments to the potential for great art in tiny, personal reflections. When combined into a single piece, however, these lessons gather weight and speak to each other in affecting ways, bringing deep contemplation about family, love and the nature of belonging.

Part one is a calm, diaristic portrait of Staroń’s girlfriend Malgosia, with the director following along with his camera, as she travels to a small Siberian town to teach Polish to exiled Poles left behind the Iron Curtain many years after it had fallen. Malgosia shares her intimate thoughts on the experience in voice-over (after an introduction by Staroń) and we watch her day-to-day experiences getting to know a new place, becoming comfortable with a particular (and damaged) culture, meeting people and trying to do the best job that she can teaching. The macro-political issues swirling around post-communist Siberia are gently glimpsed through Malgosia’s sweet-but-pragmatic eyes, giving the viewer a cautiously positive viewpoint on a clearly tumultuous situation. Malgosia’s openness and kindness allows the viewer to meet the people she meets with the same generosity. The effect is startlingly warming, despite the lonely grey cold of the landscape.

Staroń pops up occasionally, captured in reflections while holding the camera. The strangeness of watching Malgosia handle this transition alone (while in reality being there with her significant other) eventually takes over the narrative, as she begins to openly question why she (and not they) are the subject of the film. This subtle challenge undercuts the director’s objectivity-seeking camera and inserts a palpable tension, which resolves not in a disconnect between subject-documenter, but in affirmation of their feelings for each other. Suddenly we find ourselves in the middle of a true love story, resulting in final movements that are disarming and surprisingly emotional. Still, the segment ends in winning ambivalence, as a final image of dead wedding flowers communicates both hope for—and tender cynicism toward—their pending future together. 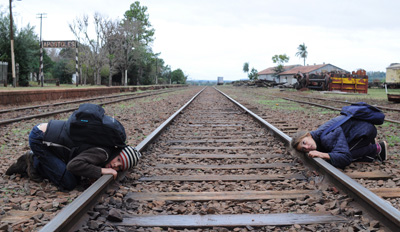 For the second part of the film, we fast-forward 15 years into the present, as the chilled desaturation of Siberia gives way to the rich color of rural Argentina. Now Wojciech and Malgosia are married with two children and the filmmaker completes the story by following his wife as she once again travels to a foreign land to teach Polish to exiles. The focus here turns to Janek, the couple’s photogenic eight-year-old son, who quickly befriends Marcia, an equally beguiling Argentinean girl of Polish descent. With no voice-over or overly guiding hand, the film becomes a meditation on childhood and circumstance, alive with the warm bodies and wandering eyes of youth.

With mischievous hearts, Janek and Marcia race each other, swim, take classes together, lay bricks for money, look out windows, go on adventures and become great friends. Less sentimental than the Siberian chapter, the mood here is earthy romanticism, dashed with an earned, tough-minded lyricism. As Marcia navigates her working class realities, Janek tags along, and his amazement at her grace and determination matches our own, as well as the filmmaker’s. She hustles for work, secretly gives her mother medicine, seems to put everything on her small shoulders. Fog rolls in, the rain comes, and seasons change. When Marcia’s father returns, stability remains just out of reach.

Like in the first chapter, the lesson here is that love is worth grasping onto, but that grip must never be too tight. In transforming a work trip to a strange place into a story about loneliness, Wojciech and Malgosia seemed to realize in Siberia that their frames should always include one another. In Argentina, Staroń’s admiration for Marcia gets reflected through the innocently adoring eyes of his son and her emotional struggles teach the boy that love is intoxicating, fleeting, bittersweet and often difficult to understand. The joy here is that these feelings are realized almost exclusively through lusciously filmed images, with Staroń displaying a profound sensitivity to faces, gestures and the natural world.

Full of wonderful observational moments, Argentinean Lesson is a masterpiece on its own. But with the trip to Siberia as its lead in, the film takes on an epic, deeply personal quality that is poignant and affirming. The whole thing plays as slightly stoic European art cinema injected with spontaneous life and unkempt beauty. That Two Lessons was reportedly always Staroń’s preference makes this release a real event. Generational, powerful, private and elemental, these chapters of a lifetime earn your attention to their quiet revelations.