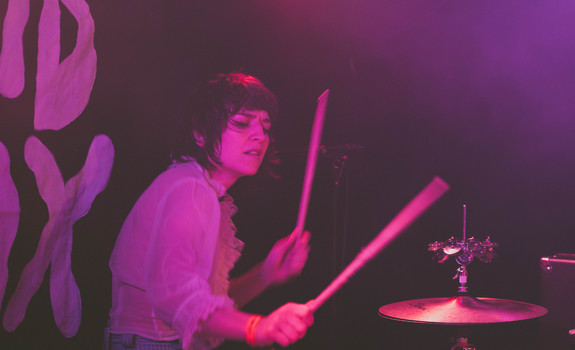 Bang that drum! Strike up the rhythm! Feel the pulse! Most importantly, help everyone stay in line, as without a good drummer, rock bands can fall apart. As Chase Noelle of the all-female group Boy Toy says, “Everyone else can make mistakes; drummers can’t.” I’m sure vocalists and other instrumentalists might have something to say about that, but it’s hard to argue with the notion that percussion plays a vital role in any musical combo. Noelle is just one of four protagonists in Lindsay Lindenbaum’s stirring documentary Tomboy, which profiles women who keep the beat, a still relatively rare phenomenon. Shot and edited well, the film moves things briskly along, as befits its subject, providing an entertaining look at a heretofore little-seen side of the music world.

Beyond Noelle, there is Bobbye Hall, Bo-Pah Sledge and Samantha Maloney, the group representing a fairly wide demographic range. Hall is the oldest, having performed in the 1970s with such legendary artists as Marvin Gaye (her bongos lead off his iconic “Inner City Blues (Make Me Wanna Holler)”), the Temptations, Bill Withers, Carole King and Bob Dylan, and then later with folks like Bob Seger and Stevie Nicks. “That woman knows how to party,” she says about Nicks. I’m sure! Maloney is next in age; she came into her own in the 1990s, a fan of heavy metal who found gigs playing first for Hole and then her idols, Mötley Crüe (who come across as sexist jerks, but there you go), before moving on to play with the likes of Peaches (you can see her prominently featured in the video for “Boys Wanna Be Her”) and others. Both are now retired, but their achievements live on as inspiration for the next generations.

Which brings us back to Noelle, a twentysomething up-and-comer whose grueling touring schedule reinforces the hard lessons learned by Hall and Maloney, who remind us, should we need that prompt, how much more difficult things get for women than for their male counterparts, who usually have domestic partners to rely on if they want a family. It doesn’t help Noelle that she’s in a relationship with her own lead guitarist; good idea or not, it certainly complicates matters. And then there’s Sledge, youngest member of the Sledge Grits Band, comprised of her and her three older sisters. Though the least experienced of the characters, she is not without her own challenges, including a father ailing from multiple sclerosis. It’s great to watch her develop, with the chance that she (and her sisters) might one day make it big.

Lindenbaum has access to a wealth of archival material, crucial for Hall and Maloney’s storylines, that she combines with present-day interviews and supporting b-roll footage, all of it mixed into a compelling narrative. At the end, when she closes with a montage of many other female drummers, we might question why she settled on only four as her main subjects, yet they each provide enough absorbing material to hold our interest, so no need to quibble. These are the badass chicks of the past, present and future, leading by example, and Tomboy is the perfect paean in their honor.