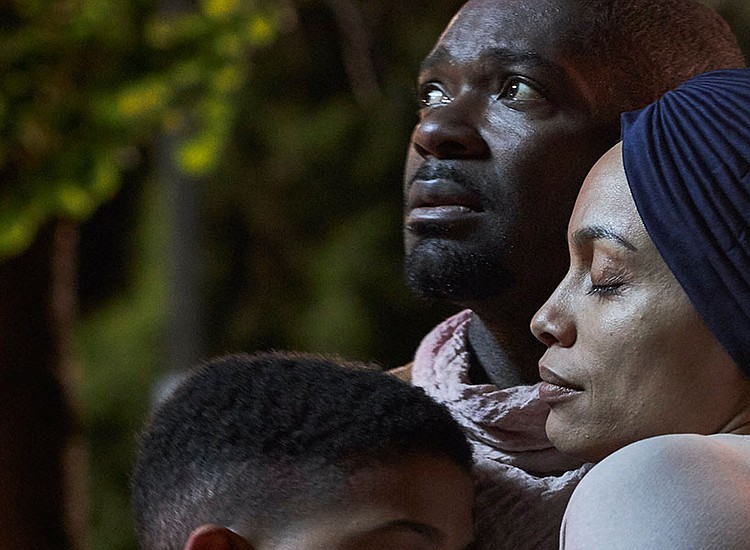 Wonder. A childlike experience of big issues in the world as the backdrop was a popular cinema style for those of us growing up in the late 70s and 80s. We had E.T. and The Goonies and so many moments of wonder.

I write this as wildfires rage in the state where David Oyelowo’s feature directorial debut, The Water Man, is set with the backdrop of wildfires in the film. The significance of the issue as a backdrop to childlike imagination is apt. The story is about a boy, who sets out on a quest to save his ill mother seeking a mythic figure that he hears rumors of as he explores his new town and meets a new friend.

But Rosario Dawson as the sick mother, David Oyelowo as the gruff father as well as Maria Bello as Sheriff and Alfred Molina as a local with knowledge of the mysterious figure all bring strong performances to the screen. But the real stars of the film are Lonnie Chavis (This is Us) as Gunner and Amiah Miller (War for the Planet of the Apes) as Jo who have to learn about friendship, mystery, what the world outside of fantasy and adulthood bring to them. Their performances are at the heart of the story and the most special moments are when the two are traveling in the forest on their own. They are two kids with fathers not present in the right ways they need and their bond forged through the movie is where the magic lies.

There’s something special you sense when a film is made with love and heart. But despite the genuine talents of the actors and passion of the filmmaker, the film falls short despite some outstanding performances and some really lovely cinematography.

What is also an issue of the film is that a Black family living in Oregon, a place founded as a white utopia and still about 87% white, only briefly encounter subtle racism and what remains a real issue in the state is mostly ignored beyond a dinner conversation at the beginning and one comment spoken to the white Sheriff. And while not the point of the story, the representation of the lead, Lonnie Chavis, in magical kid-driven movies was a missing ingredient of the 80s adventure films. Goonies even going so far as to have Asian stereotypes for the only non-white people in the film. In that murky sense, Oyelowo’s placing the film in such a center of Whiteness is radical in making sure better representation happens.

What came to mind when watching the film is Fern Gully: The Last Rainforest which taught us the importance of our forests and nature and climate as well as Bridge of Terabithia.  What The Water Man lacks that all the aforementioned films do is leaving that sense of wonder. A magical realism gone solely realistic at the end lacks that wonder and joy we hope cinema will keep alive for us. And perhaps for 2020 that is exactly the film we deserve but perhaps not the one for which our souls yearn. While we know as adults the practicalness of his journey ending in the way he hopes, it is perhaps Dawson’s character who reminds us of the point of all of it: celebrating right now with those we love and not worrying about problems of the future.