OVERNIGHTERS, THE
A Stunning Elegy To The Elusive American Dream

(The Overnighters was picked up for distribution by Drafthouse Films and opened on Friday, October 10, 2014. It world premiered in the US Documentary Competition at the 2014 Sundance Film Festival, where it won the Special Jury Award for Intuitive Filmmaking. Visit the film’s official website to learn more.)

The filmmaker Jesse Moss embedded himself in Williston, North Dakota, a town whose recent fracking boom has made it a beacon for so many wayward, unemployed American men. Some come with trucks or RVs; most leave behind families or checkered pasts; nearly all have nowhere to go. Pastor Jay Reinke of the Concordia Lutheran Church opened his parish doors, and floors, to let in many of these lost souls, providing them with shelter and guidance, an action that the locals greatly protested. But the story of Williston is really only a framework for The Overnighters, which takes on much larger issues that are tackled with a graceful ease that only the most skilled of filmmakers can accomplish. Trying to write a review of this film is impossible. After struggling for weeks to convey the layered texture, meaning and symbolism of it—quite possibly the very best documentary of 2014—I’ve decided to leave you with three scenes of startling nonfiction filmmaking that I suspect will haunt me forever.

1. A slightly shaky camera approaches the backs of two men stationed near the bed of a pickup truck; a busy road and a paved parking lot surrounds them. A wing is seen. A slight struggle. It’s a seagull. Restrained. There is quick debate: do we cut the string or try to release the hook from his mouth? The men caught the bird by swooping a fishing pole baited with bread over the lifeless parking lot. Another man, baffled and concerned, appears, trying to make sense of this senseless act.

When people are jobless they are filled with a lonely wandering rage or sadness brought on by fear. They often try to take control of their situation using whatever is around them, even if that is just a wild bird on a string. Pastor Reinke’s attempts at imbuing meaning into the lives of these men and creating a community for them was an extension of trying to establish order in the chaos. How do we make sense of the crumbling economic foundation? How do we find a will to live, and let others live, when the very identity of capitalist man, his job, is lost? 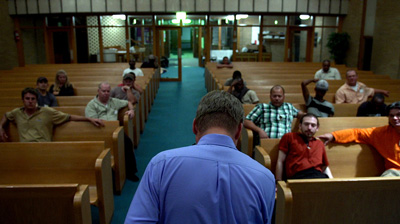 2. The young son of Pastor Reinke sits on a dingy carpet, bundling the local paper into thin orange plastic bags, throwing them into a growing pile on the floor. He shoves them into a sack in preparation for delivery, biking through the house-lined streets that look like some pristine version of a long past idea of an American suburb. As his mother sits beside him, she calls her husband to let him know that the paper is speaking ill of the church again. Emblazoned on the front page is the paper’s motto: “Where there is no vision, the people perish.”

Though it is a matter of whose vision one wants to look through that defines who it is that will perish. The paper fears the erosion of its own community. The transient workers worry their existence is threatened in the town and, without jobs, outside of it. The pastor has a vision of saving people from sin, from homelessness, from themselves. This scene shows the intersection of media, faith and identity, all issues that are inherent rights in the free world but whose contradictions continue to grow. The Overnighters asks who and what defines us, not just as Americans but also as human beings.

3. The end of the film. I won’t say much more than that. The last ten minutes spiral out into a conclusion that is jaw dropping and so beautifully reserved in its execution that I can’t even begin to describe it.

Jesse Moss’ subject isn’t Williston or fracking. It is an entire country that is looking for itself after a decade that began with a national tragedy and ended with a depression. America is so preoccupied with positioning itself on a global scale that it tends to lose sight of the humans behind the statistics, the daily lives of those embodying the political, social and cultural issues. The Overnighters is beyond a documentary. It is a stunning elegy to the elusive American dream. 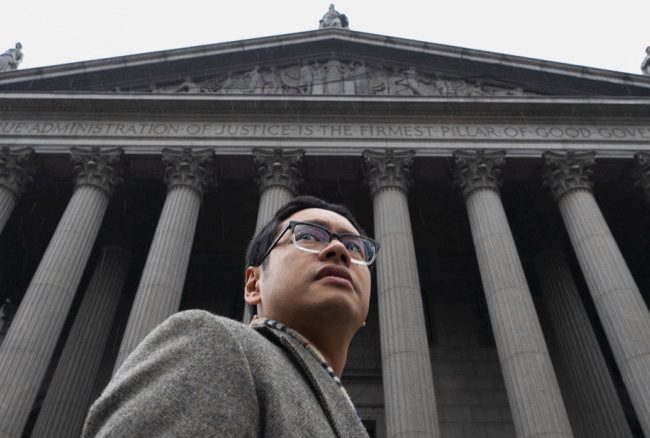