As can sometimes be the case with attention-grabbing titles—Snakes on a Plane, Hot Tub Time Machine, and Hobo with a Shotgun all come to mind—some premises are so perfect that the film in question feels bound to disappoint. Enter David Nettheim’s The Hunter, whose story IMDb summarizes thusly: “Martin, a mercenary, is sent from Europe by a mysterious biotech company to the Tasmanian wilderness on a hunt for the last Tasmanian tiger.” Let’s review here: this is a movie in which Willem Dafoe tracks a likely-extinct, semi-mythical creature through one of the last true wildernesses in the world. It’s compelling in its simplicity and like catnip for anyone with a yen for gruff survivalism and philosophical laconicism (a group to which I, uh, may or may not belong). And so the question is immediately raised: does Nettheim deliver the goods? Well, not really. At least not in the way you might expect. There are extended silences, stunning backdrops, and scenes consisting of little more than Dafoe hunting something that may well be impossible to find, but they’re slowly revealed as a starting point rather than the main draw. And that’s okay. The Hunter succeeds, just not on the terms it initially appears to be setting for itself: it’s the Tasmania-set semi-psychological thriller we deserve, even if it’s not the one we may have wanted…

A look at two of the film’s two posters is oddly instructive in sussing out this disparity between expectation and reality. One of them is icy blue, with a somber-looking Dafoe carrying a high-powered rifle as snow falls around him; the other, which came first but has since been replaced, is colored by warm greens, finds a weaponless Dafoe looking contemplatively into the distance rather than leering, and even shows the two children for whom he ends up becoming a father figure. It’s not as sleek and doesn’t draw the eye in the same ominous way (hence its replacement), but it’s also a much more accurate rendering of how the film actually plays out. I wouldn’t be focusing on what ultimately amounts to nothing more than marketing were it not so representative of how this movie evolves from one thing into another, not least because where it ends up is so markedly different from where it at first seems to be heading. 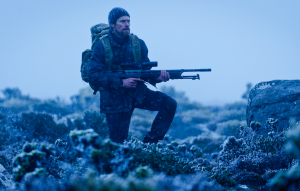 Based on the novel of the same name by Julia Leigh (best known to moviegoers as the writer-director of last year’s Sleeping Beauty), the film is as concerned with filial drama and environmental intrigue as it is with the clash between a lone hunter’s psyche and the harsh environment that both mirrors and distorts it. Indeed, there’s quite a bit more afoot than a possibly nonexistent tiger: Martin is met with so-so digs and hostile locals who treat any ecologically-involved outsider as a threat to the logging industry that supports their endangered livelihoods. Here and elsewhere Martin appears averse to the company of others to the point of looking less comfortable in a group of people than he does alone in the wilderness. At first something of a result-oriented cipher—”I’m here for work,” he declares early on in one of his more self-serious pronouncements—he ultimately struggles with the many implications of his quest and the ways in which successfully completing it might change him for the worse. Think of him as an Ahab-like figure who’s better able to balance monomania with some needed self-awareness.

Nettheim doesn’t use these forays into the wild as a means of plumbing the depths—whether psychological, physical, philosophical, or any combination thereof—to quite the extent the film’s premise and star suggest they’re capable of, instead touching on a checklist of concerns while gliding from one development to the next. No mere hunting machine or grisly survivalist, Martin eventually becomes a surrogate father and, in a most unusual way near the end, concerned environmentalist. But as The Hunter‘s scope expands, we’re left wondering which of its many predilections trumps the others. An increasingly strange task to be sure, but one that’s ultimately made worthwhile by Dafoe’s typically solid performance and a tonal consistency that helps unite the disparate set-pieces. The experience isn’t likely to make your pulse pound or your heart race, but it will allow you to catch scattered, sometimes mournfully unsustained glimpses of sights both odd and beautiful.