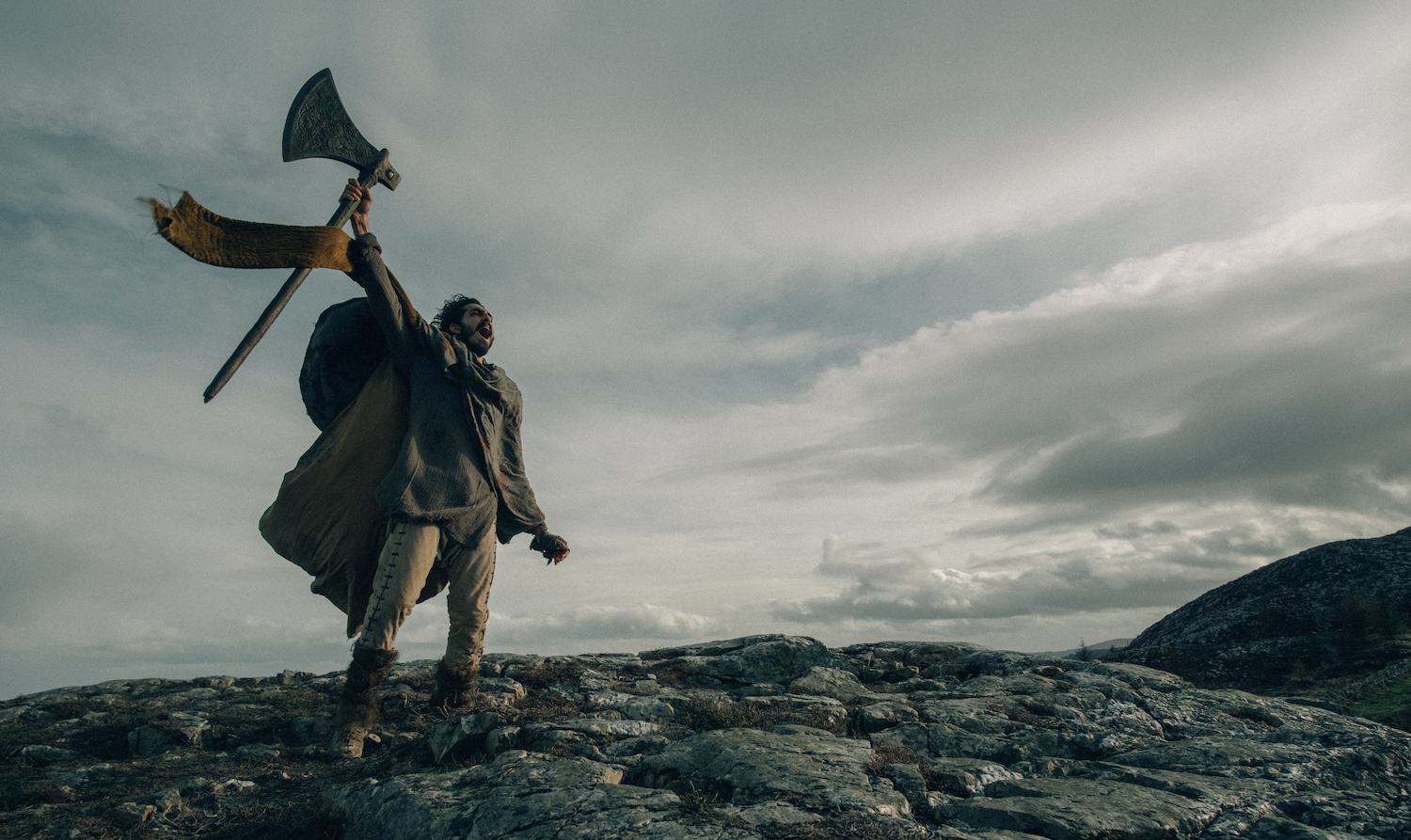 (David Lowery, former HtN contributor and director on an amazing trajectory, had his latest release, The Green Knight, in theaters July 30 via A24. The film is streaming on all major platforms starting Thursday, August 19, 2021. Like what you see here on Hammer to Nail? Why not give just $1.00 per month via Patreon to help keep us going?)

The 14th-century poem Sir Gawain and the Green Knight follows a young knight of King Arthur’s court who finds himself entangled in a supernatural contest with a mystical figure whose head he chops off at the start of the tale. Before he commits that act, he is warned that whatever blow he strikes will be returned a year hence. Somehow ignoring the repercussions of the deed, he proceeds anyway. Adventures and misadventures follow, at the end of which he meets once more with his former adversary. In his new film, The Green Knight, writer/director David Lowery (A Ghost Story) revisits this classic narrative, turning it into a powerful examination of cowardice and redemption. More than the journey, which is sometimes tedious, it’s the final destination that matters here, delivering a rousing jolt of existential awakening that reveals the many layers of meaning that have lurked just below the surface the entire time.

Dev Patel (The Personal History of David Copperfield) stars as Gawain, who is very much not a knight (yet) in this version. The king’s nephew, he is the son of a witch (Sarita Choudhury, Evil Eye), and a bit of a carefree spirit, desirous of glory without any sense of how to achieve it. His girlfriend, Essel (Alicia Vikander, Tomb Raider), would like nothing more than to settle down together, but how can he give up on his dreams without yet having tried to achieve them? And so, when one Christmas morn the Green Knight appears at a party thrown by the king (Sean Harris, Mission: Impossible – Rogue Nation), Gawain volunteers to meet the creature’s challenge. Borrowing a sword, he chops off one green head. The knight promptly picks it up and rides away, laughing that they will see each other in a year.

That year then far-too-quickly passes, Gawain frittering it away in drink and inertia. But as the next Christmas approaches, he finally gathers himself, pushed by the king and his mother (who gifts him a magical belt that will protect him, she says) to do the right thing. Off he goes, then, filled with anxiety and definitely unprepared. The original Gawain, on his odyssey, proceeded to carry out many chivalric deeds on the way to his appointment. In Lowery’s The Green Knight, our hero is far more passive. At every turn, he seems barely able to function.

And that, it turns out, is both to the good and the bad of the movie. While Lowery’s intentions will eventually become clear (patience is a cinematic virtue worth practicing), in the meantime it can be frustrating to invest in a protagonist that not only so often does the wrong thing, but more often does nothing without urging. Still, Patel is an actor whose face is exceptionally expressive and moving even in repose, and so our time with him is not without reward.

Better yet, there is method to Lowery’s seeming madness, for he has ulterior motives to his meandering flirtation with destiny. Time folds in on itself, even as it progresses at a snail’s pace. Not all elements make immediate sense (why does Vikander repeat as a second character, for example, and what role does Gawain’s mother play in the conjuring of the Green Knight?), but they all add to the accumulation of portent and substance, until Gawain’s eventual reckoning can only result in the one outcome we see. And what an ending it is, in which the young knight, now older and not much wiser, finally confronts the sins of his past. He chose the path of least resistance, the wages of which are steep. It’s not enough to want fame and fortune; you have to earn it.

As a parable of greed and consequence, The Green Knight delivers compelling drama, even as we’re not always sure where it’s headed (which is not necessarily a negative). Bolstered by evocative production design (with sometimes less effective CGI, though the one digital fox is cute), it evolves over its 125 minutes into a searing exposition of how to correct a misspent life. No matter how or when, the Green Knight lies there, waiting, always ready should one decide to do the right thing.