(Distributed by Oscilloscope Pictures and Milestone Films, The Exiles is now available on DVD

. Visit the film’s official website to watch a trailer and learn more.)

Down and out on the margins of post-war, downtown Los Angeles, the subjects of Kent Mackenzie’s The Exiles—itself a seemingly banished film for nearly half a century—are Native Americans, most of whom struggle with the overwhelming effects of joblessness, alcoholism and urban alienation. Considered a documentary by its makers, who were greatly influenced by the school of British and Canadian non-fiction associated with Basil Wright and Humphrey Jennings, the film simultaneously has the fly-on-the-wall, off-the-cuff immediacy of mid-period Cassavetes and the delicate design and rich lighting schemes of Golden Era Hollyood. Working in a mode not unlike the Robert Flaherty of Nanook of the North, the film is made up of reenactments of sorts, taking a group of non-actors, mainly Natives, with a Latino or two sprinkled in, and having them live out a scenario not too dissimilar from their daily experience.

The Exiles revolves around twelve hours of drunken reveling, moody contemplating, and aimless wandering amongst a small community of Natives who have recently relocated from poverty stricken, but close-knit, reservations in Northern Arizona to seek work and a better life in Southern California. What they have found is menial labor, embarrassment and unending loneliness that, despite their tenuous ties to each other, prove largely insurmountable and inescapable.

Shot piecemeal for several years in the late ’50s and early ’60s, The Exiles unfurls in glorious black-and-white courtesy of cinematographers John Morrill and Erik Daarstad. Despite its rather consistent visual beauty, it’s made with a largely no-frills style that harkens back to the hard noirs of a decade before. Mackenzie and Co. give us glimpses into the fears, hopes and naked desires of these people through incredibly candid voice-overs that compliment the ethereal but rather thin narrative elements. The film works almost entirely as a tone poem, its flat, wandering narrative and verisimilitude exhibiting once again the strengths inherent in the dominate mode of American indie films: class conscious realism. 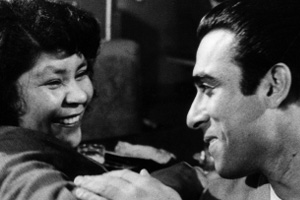 The Exiles represents perhaps one of the earliest examples of DIY filmmaking to surface following the advent of film education in the years after the explosion of television and the collapse of the hegemony that American film studios exhibited over narrative production (save Oscar Micheaux, Spencer Williams & the skid-row auteurs of the late ’40s) until the late 50s. Mackenzie was fresh out of USC’s brand new film school in 1958 when he began the project, which was shot with borrowed 35mm gear on short ends and discounted stock, with a crew made up mainly of film school friends.

Riding a wave of renewed interest following its inclusion in Thom Andersen’s neat homage to LA cinema Los Angeles Plays Itself, The Exiles is being released commercially for the first time in America following its inclusion in the initial New York Film Festival way back in 1964. Mainly available on bootlegs and terribly kept 16mm university prints for the past four decades, it’s getting much the same treatment that co-presenter Charles Burnett’s Killer of Sheep received from distributor Milestone Films last year. Here’s hoping they’re able to approximate a similar level of theatrical success for this nearly lost American gem.