(We here at Hammer to Nail are all about true independent cinema. But we also have to tip our hat to the great films of yesteryear that continue to inspire filmmakers and cinephiles alike. This week, our “The Curbside Criterion” continues where HtN staff can trot out thoughts on the finest films ever made. Today Brad Cook explores the new Blu-Ray release of Fantastic Planet, the animated 1973 French film that’s a clever and subversive as ever.)

A film about humans kept as pets by alien creatures seems quaint today, but Fantastic Planet is much more than that. It also rebels against conformity, examines the use of violence as a means to an end, and delves into questions of what constitutes knowledge and intelligence, and whether someone could possess one without the other.

This 1973 animated French film takes place on the planet Ygam, where humans known as Oms are kept as pets by the natives, giant blue creatures with fin-like ears called Draags. Some Oms are also kept in the wild and subjected to regular “de-Omings” during which many of them are killed to keep their population in check.

Our protagonist is Terr, an Om whose mother is accidentally killed by some Draag children who regard her death the same way human children on Earth might think about knocking around a bug until it dies. A Draag child named Tiwa keeps Terr and exposes him to her studies, assuming that he’s too simple-minded to understand any of the information.

Terr understands much, however, and soon figures out that another de-Oming will be happening soon. He escapes with Tiwa’s knowledge-imparting headset, finding himself in the company of some wild Oms who actively resist the Draags. They are skeptical of his intentions and he’s forced into a duel to the death to prove his worth. Afterward, Terr shows them how to use the headset, despite their leader’s protests that Draag knowledge is useless, a twist on an earlier scene in which some Draags wonder if Oms possess any intelligence.

The Oms develop technology to resist the de-Oming, which prompts the Draags to institute a genocidal final solution. Eventually, the Oms realize they must try to escape Ygam for its moon, known as the Fantastic Planet, if they are to ever find peace. As film scholar Michael Brooke notes in the essay accompanying this Criterion Blu-ray release, the story of Fantastic Planet takes on additional resonance when one realizes that it was made in Czechoslovakia in 1968, when the Soviet Union invaded. (Funding problems delayed its completion until 1973.) 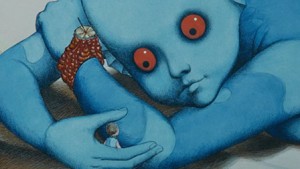 This movie is worth experiencing at least once for its surreal animation created with low-tech cutouts, much like the cartoons Terry Gilliam created for the Monty Python TV series. In fact, there are some similarities between both in the style of their jokes. Early during Fantastic Planet, for example, a creature hatches from an egg and another animal comes along and licks it, as if caring for it, before suddenly swallowing its prey whole.

Fantastic Planet is based on a French novel by Stefan Wul (the pen name of Pierre Pairault). As Brooke also points out, the French writer Pierre Boulle explored similar themes around the same time in his novel Planet of the Apes, whose theatrical adaptation fared a bit better than this film by Rene Laloux and Roland Topor.

This Blu-ray features a new 2K digital restoration of the film, along with new English subtitles (you can listen to it dubbed in English, if you prefer) and the trailer. Also included are a pair of early short films by Laloux and Topor that explore similar themes, along with a 27-minute 2009 documentary about Laloux that has a lengthy interview with him.

Episodes from two French TV series, one from 1973 and the other from 1974, round out this disc. The first is a four-minute excerpt featuring an interview with Topor and the other runs 54 minutes and looks at his career in more depth.