(We here at Hammer to Nail are all about true independent cinema. But we also have to tip our hat to the great films of yesteryear that continue to inspire filmmakers and cinephiles alike. This week “The Curbside Criterion” continues where HtN staff can trot out thoughts on the finest films ever made. This week Brad Cook dives into the new Blu-Ray release of Easy Rider, the classic rebel film that helped change the industry.)

Easy Rider tells the story of Wyatt (Peter Fonda, whose character is also ironically known as “Captain America”) and Billy (Dennis Hopper), two bikers who score a big drug deal and head off for New Orleans to celebrate. Along the way, they meet a rancher who offers them a meal, the leader of a commune who fashions himself a modern-day Jesus, a drunk ACLU lawyer named George Hanson (Jack Nicholson) who gets them out of jail and decides to come along for the ride, and a pair of New Orleans prostitutes with whom they drop acid.

On the surface, the film seems like nothing more than a travelogue with a few bits of nondescript dialogue thrown in when 60s-era music isn’t playing on the soundtrack. But there’s a line that Wyatt utters toward the end of the film, before he and Billy meet their fate: “We blew it.” It’s an enigmatic statement juxtaposed against Billy’s excitement over all the money they made, but when you think about it, “We blew it” sums up not only the way the pair squandered an opportunity to make their lives about more than money but also the way the 60s ended: race riots; the deaths of Martin Luther King, Jr. and Robert Kennedy; the passing of several rock icons; and the violence that marred the Altamont rock festival. Certainly not a way to end a decade that promised peace and love, and Easy Rider‘s commune scene, in which “Jesus” shows himself to be more of a tyrant than a true hippie, clearly illustrates the decay.

The film is rough around the edges, of course. Its modest budget shows in the scene where a character is beaten to death by a bunch of ignorant rednecks — instead of flailing bodies and kinetic energy we get some baseball bats hitting a sleeping bag and a shot of an actor lying on the ground, fake blood clearly smeared on his forehead. And many of the minor characters were locals recruited as the production drove across the country, so some of the dialogue is delivered in a stilted manner. 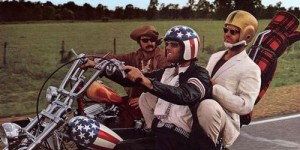 In fact, even some of the scenes with professional actors come across a bit awkward because so many of them were improvised, although Nicholson is always on the ball in the role of Hanson — the incredulity that scrunches up his face when he’s offered a joint is amazing, especially when you consider that the actor had plenty of experience with the stuff himself. But the ideas are what Easy Rider is really all about, and Hopper and Fonda clearly had a lot to say, even if they didn’t always know the best way to say it.

This Blu-ray is identical to the one that Criterion previously included in its America Lost and Found: The BBS Story collection, so if you have that set, there’s no need to double-dip. In 2004, Columbia released a 35th anniversary edition that had the soundtrack on a separate CD and a nice essay book from the British Film Institute, along with the hour-long 1999 documentary Easy Rider: Shaking the Cage and a commentary track with Hopper. This Criterion release ported over the documentary and Hopper’s commentary, along with another commentary featuring Hopper, Fonda, and production manager Paul Lewis. The book and the soundtrack CD aren’t included, so you may want to hold onto that Columbia release, if you have it.

This edition also serves up the theatrical trailers, a 30-minute 1995 documentary from BBC 2 called Born to Be Wild, clips of Hopper and Fonda from the 1969 Cannes Film Festival, and an interview with BBS co-founder Steve Blauner. BBS was founded by Bob Rafelson and Bert Schneider in the 1960s as Raybert Productions, which had a hand in the making of Easy Rider, Five Easy Pieces, and the Monkees’ TV show. The company then took on Blauner as a partner, turned into BBS Productions, and produced more classic 70s movies, including The Last Picture Show.

Finally, Criterion also included a fold-out pamphlet with an essay by film critic Matt Zoller Seitz. I’m glad they continue to include printed materials in their releases, since the major studios have pretty much abandoned the practice.

While there’s nothing new in this release, it does bring together a variety of materials that haven’t been available in other home video releases of this film, aside from that Criterion box set, so it’s a worthwhile add-on for fans.