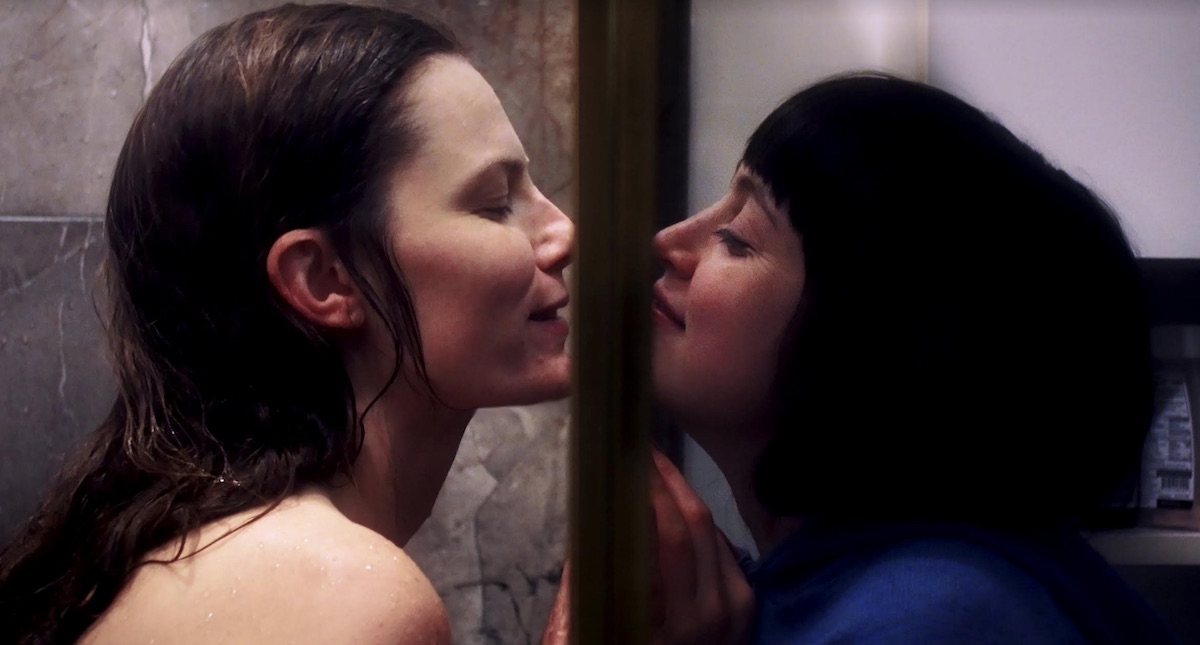 (Caleb Michael Johnson’s The Carnivores was slated to debut at the 2020 SXSW Film Festival. Alas…it’s become a #LostFilmsofSXSW. Like what you see here on Hammer to Nail? Why not pay just $1.00 per month via Patreon to help keep us going?)

The Carnivores isn’t about meat. But it’s not, not about meat. The plot of Caleb Michael Johnson’s (Joy Kevin) sophomore feature involves a couple who struggle to maintain their relationship because of their terminally ill dog, Harvie. Brett (Lindsay Burdge, The Invitation) is more emotionally invested in keeping Harvie alive for as long as possible despite the fact that his treatments are taking them beyond their means. Meanwhile, Alice (Tallie Medel) obsesses over their negative finances and how often she and Brett are intimate (not very). Flesh is a recurring theme in this surreal psychological romantic horror film co-written by Johnson and Jeff Bay Smith. What does it mean that we both consume flesh and are made of flesh? Why is some meat precious and other meat food?

The Carnivores also explores how a pet can be a major point of contention in a relationship. Brett has had Harvey the dog for 2 years longer than she has known Alice. The fact that she even mentions this to Alice speaks volumes, since Alice is painfully aware of the hierarchy. Harvey has been sick for a long time. But he is undergoing expensive life-prolonging treatments because Brett can’t bear to let him go. She isn’t even considering how much of a strain his ailment is on their lives. Alice secretly tracks their finances, her sleep, and their sex life, all of which are woefully sparse. To make matters worse, Alice has started to sleepwalk and crave meat despite her longtime vegan diet. Alice keeps her disconcerting thoughts from Brett, but appears to confide in a loquacious, know-it-all co-worker – he references details of her life despite their seemingly one-sided lunch conversations.

Brett has a secret of her own which is that she feels closer to her dog than she does to her partner. When out for a solo walk with Harvie, she tells him that if he would only speak to her, she would do whatever he said (serial killer David Berkowitz had a similar relationship with his dog).

Alice’s stress is compounded when she must take Harvie to the vet without Brett (who can’t get time off work) and is told that the treatments they can’t afford are working well enough to keep their fur baby alive for another year or two. When Harvie disappears, Brett and Alice separately unravel – Brett because she’s lost her best friend and Alice because she fears she is responsible. She may or may not have taken him to the park and left him there in the middle of the night. They’re both losing their minds from grief. Brett grieves Harvie and Alice grieves her relationship with Brett.

Johnson does a terrific job with pacing for an arthouse film, letting scenes breathe while keeping the whole thing under 80 minutes. While many films focus on either the beginning or end of a relationship, Johnson and Smith’s script captures the often-overlooked middle period of a long-term relationship – the dichotomy between feeling stagnant but also panic-stricken over the idea of losing your partner.

Johnson and Smith keep the audience guessing about what is real and what is deranged fantasy. The meditative close-up shots both exemplify Alice’s crumbling state of mind and put the audience right there with her. I too am a vegetarian but I have to admit I was mesmerized by Alice’s meat-prodding POVs. This film is a terrific showcase for Medel who conveys oceans of emotion with her big eyes. Her face when she rubs a piece of plastic-wrapped beef at the grocery store is a cocktail of fascination, horror, and eroticism. Not something you see every day.