(Terri is now available on DVD

and Blu-ray. It world premiered at the 2011 Sundance Film Festival. Distributed theatrically by ATO Pictures it opened on Friday, July 1, 2011. Visit the film’s official website to learn more.)

Coming after the superb cinematic hat trick of Nobody Needs To Know (2003), The GoodTimesKid (2005) and Momma’s Man (2008), Azazel Jacobs’ Terri (2011) re-confirms the director’s status as one of American Independent Cinema’s leading visionaries and most heartfelt voices. As daring as it is endearing, Terri butts heads with the clichés that have plagued high school movies for generations, and Jacobs manages to tell a story that will resonate with viewers without resorting to cloying truisms. Finely crafted and frequently hilarious, Terri has already performed well at both Sundance and SXSW, and is poised to be one of the standout independent features of the year.

Terri (masterfully portrayed by twenty-year-old Jacob Wysocki in his first leading role) is an overweight and aloof teenager who lives with his Uncle James (Creed Bratton of The Office fame) in a house by the woods. Theirs is a symbiotic relationship—the sickly looks after his nephew as much as he needs to be looked after himself. Uncle James raises his Terri like his own son, while Terri medicates and cooks for his mentally and physically ill relative. At school, where he is teased incessantly because of his weight, Terri is taken under the wing of Vice Principal Fitzgerald (John C. Reilly at his irreverent and off-beat best), who is as much a misfit as the teens he mentors. Through Fitzgerald’s office, Terri befriends fellow outsiders like Chad (Bridger Zadina) and Heather (Olivia Crocicchia), and together the three undergo all the weirdness of adolescence like drugs, sex, and friendship. 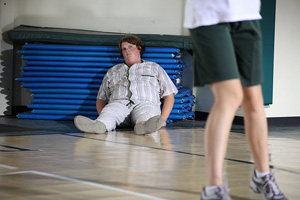 In the hands of less adventurous filmmakers, this scenario could easily descend into maudlin coming-of-age dribble, but Jacobs and co-writer Patrick Dewitt don’t let that happen. One of the true strengths of Terri is its lack of sentimentality. Going against the grain of the clichéd “overweight teen,” Terri never for a moment pities himself. He is still undergoing a lot of self-exploration, but he exudes both self-confidence and independence. Were it not for Wysocki’s spectacular performance, the character might not work. He nails that interior world of a teenager wise-beyond-his-years, but still emotionally underdeveloped in many ways. He puts his Uncle to bed like a nurse, yet he wolfs down beans-on-toast like a child. He gallantly takes a teacher’s scorn in order to protect Heather, but is at a total loss when it comes to her blossoming sexuality. When she comes over, his only plan is to show her his vintage paperback collection and his sleeping uncle. There’s nothing “twee” about their relationship, and it is refreshing to see a film that doesn’t drown its protagonists in precious, nostalgic gravy.

The most remarkable quality to Terri is the way it embraces not just the awkwardness of adolescence, but also the violent, uncomfortable, and self-destructive urges that we all know are real but which movies, for some reason, like to forget. Maybe filmmakers—or, more likely, studios, the MPAA, and the parents that fund their kids’ moviegoing habits—like to think that if the movies don’t show kids exploring sexuality or popping strange pills, it just won’t happen. After Terri is caught killing mice and feeding them to birds, Vice Principal Fitzgerald doesn’t admonish him. Instead, he sympathizes with the impulse and explains, “It’s bloodlust, dude.” The ensuing speech about a childhood friend who tied flaming balls to cats’ tails is a pitch-perfect example of John C. Reilly’s surreal humor—but there’s also a sincere grain of truth as he points out that Terri felt bad killing the mice, as opposed to his friend who felt no remorse for terrorizing felines. Even Fitzgerald seems to be at a loss for the moral of his story, but somewhere within the weirdness is an uncommonly raw honesty, and Terri excels at revealing these nuggets of truth without belabored messages or saccharine slogans. 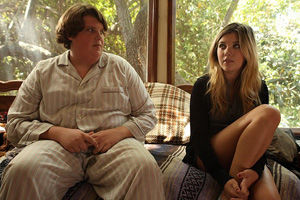 The climax of the film, and its most fully realized scene, is an impromptu garage-party between Terri, Chad, and Heather. Terri wants a friend, Chad wants to get laid, and Heather is caught between the pull of womanhood and the security of childhood. High on pills, drunk on whiskey, and stuck in the same room together, it’s a magical mess of youth whose wonders aren’t spoiled by any dramatic designs or forced moralizing. Jacobs manages to capture the reticent profundity of the evening, whose importance isn’t even fully understood by the characters. Even if it’s not autobiographical, Jacobs gives it this personal power, the sort of relatable experience that made Momma’s Man so moving to watch. Terri doesn’t shy away from Heather’s strong need for physical touch despite her young age nor does it indulge in wish-fulfillment as Terri struggles to prepare for what might be his first sexual encounter. Jacobs stays true to his characters and resists the trappings of precociousness and clichés that have been the ruin of so many high school narratives.

Azazel Jacobs has never been a filmmaker to rest on his laurels, and each successive film shows that he is pushing himself in a new direction, yet his personal touch and inimitable grace is always unmistakable. While Terri shows traces of the idiosyncratic humor and outsider characters of The GoodTimesKid and the nostalgic, magical sense of space and home of Momma’s Man, this new film is very much its own thing. There’s plenty of reason to love each of his movies—the quirky vigor of The GoodTimes Kid is irresistible, or the deeply universal emotions of Momma’s Man as a son grapples with his aging parents—but, in a way, Terri is Jacobs’ best film to date, and it is certainly his most accessible and delightful. Jacbos has shown that you can make an independent film that is appealing to mass audiences without compromising one’s vision or the honesty of the story and its characters. Terri is a film that deserves to find a wide—dare I say “mainstream”—audience. It would not only benefit Jacobs’ career, but also so many independent filmmakers’ careers, as it would show that one doesn’t have to descend to Little Miss Sunshine-ish ripoffs in order to reach mass audiences. Here’s hoping that Terri finds the critical and box-office success that it deserves.