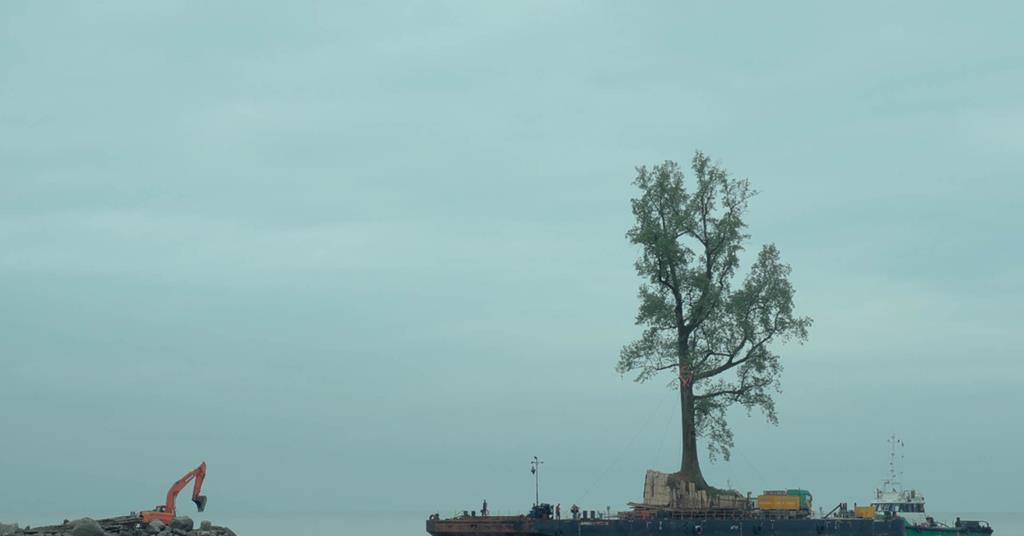 (Check out Ray Lobo’s movie review of Salomé Jashi’s documentary Taming the Garden, streaming now on Mubi. Seen it? Join the conversation with HtN on our Letterboxd Page.)

Fishermen looking onto the endless blue of the Black Sea gives the opening shot of the Georgian documentary, Taming the Garden, the look of a Caspar David Friedrich painting. The next shot takes us from Romanticism to absurdity. We see a fully grown tree being transported on a boat. What could be the motivating factor behind uprooting a tree and moving it across the sea? What could possibly be this tree’s destination? At this point we echo David Byrne and ask, “well, how did we get here?”

Director Salomé Jashi gives little explanation or even dialogue that can orient us as to why trees are being moved in the documentary’s initial stages. The lack of explanation is more than fine—in due time we get our explanation. Through visuals and audio, Jashi communicates the themes operating in this narrative of uprooted trees. Bird songs are juxtaposed with the jarring grind of a chainsaw. A fast descending fog upon some trees is juxtaposed with clumsy excavators that rip soil. Jashi fixates on the machinery doing the sawing, ripping, and uprooting. There is no spirit of Romanticism here, none of the poetry of humans living with and enduring the harsh whims of nature. Nature is the one here enduring it all– the sawing, uprooting, and maiming by humans. Jashi captures the machines and drills performing their task in ways that feel almost obscene. Once we learn the motive for all this, all the work surrounding these trees becomes even more vulgar. The trees are being removed from this small Georgian town and being transported to the estate of Georgia’s richest man in order to complete his arboretum.

Jashi does what some of the best filmmakers do, which is to allow both images and characters to tell the story. Townsfolk both praise and disparage the billionaire buying up their trees. They wonder whether the jobs he is providing and the roads he is building come at too steep a price. Townsfolk weep as trees that existed in their yards for generations are removed. These trees provided fruits, they provided shade for generations, and child after child played on them. Jashi’s film is a meditation not just on the eternal struggle between humans and nature, but also one on exploitation and class differences.

Taming the Garden unfolds slowly. Its rhythm, tone, and thematic reminds one of other recent European documentaries such as Honeyland. Jashi has given us yet another example of how folks are squeezed by an international hyper-capitalist system that sees the world only in terms of private ownership. If we run with the metaphor in the title, not only has the garden that is nature been tamed, but also the working class and poor. It takes a long time to tame a wild animal. It takes but a second for it to strike back at its tamer.