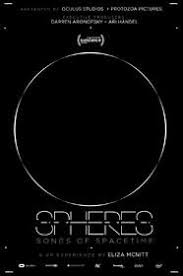 (Lauren Wissot attended an amazing panel with Eliza McNitt and Jess Engel to discuss their Darren Aronofsky-produced VR series Spheres at the FilmGate Interactive Media Festival. Spheres will open at the Rockefeller Center in NYC on January 18. Like what you see here on Hammer to Nail? Why not pay just $1.00 per month to help keep us going?)

“No human has fallen inside a black hole…until now,” VR artist Eliza McNitt stated at the beginning of what turned out to be one of the industry panel highlights at this year’s FilmGate Interactive Media Festival. McNitt, who’s twice won the Intel International Science and Engineering Fair, was seated onstage beside Jess Engel, producer on their planetarium-in-a-headset experience Spheres – a “three chapter journey to discover the sounds of the universe” – on a sunny Saturday afternoon at downtown Miami’s Silverspot Cinema. (That luxurious venue, with reclining leather seats and foodie menu – a la Alamo Drafthouse or Violet Crown – also had the strange effect of making me feel like the two XR evangelists were holding court in my living room.)

Surprisingly, it was from McNitt’s award-winning Intel project – which explored the vanishing of honeybees around the world – that initially led her to the cosmos. The prestigious fair’s prize included a visit to the Large Hadron Collider at CERN (the European Organization for Nuclear Research), which in turned got her thinking beyond our world. “What else was out there?” she wondered. At that instant she “realized the power of science in storytelling.”

Interestingly, McNitt described the steps to creating Spheres as similar to the scientific process. Fistful of Stars, a “space opera” that premiered in Brooklyn’s Prospect Park in 2016 (and which put six thousand people in headsets for a six-minute VR experience) was the precursor to Spheres that McNitt and Engel originally paired up to create. It was about “everything in the universe we could see with our eyes,” McNitt emphasized, which only led her to further ponder – what were its sounds? The collision of two black holes that we Earthlings were finally able to hear (through the detection of gravitational waves in 2015) gave McNitt her long-sought audio of the cosmos.

At this point McNitt rolled an interstellar-like clip on the giant screen behind her and the sound of Earth – its “call,” which other planets respond to – was heard, followed by Jupiter’s “response.” Though these remarkable sounds are all available on the NASA website there’s nothing like hearing them in Dolby surround. (Saturn’s rings sound downright eerie to my ears.) This amazing audio proved the perfect building block for what would eventually become McNitt’s VR tour de force.

The opening episode of Spheres “makes the invisible visible,” McNitt explained. Through the intersection of science and art we “become” the cosmos. Engel spoke about space as something people are fascinated by, a subject guaranteed to draw crowds. This was made crystal clear to her during the eclipse that happened while she and McNitt were working on their project’s script in LA. They decided to visit the Griffith Observatory – which was packed. McNitt added that embodying “characters” – like a star or a black hole – was thrillingly possible in a medium like VR. She also talked about her fear of black holes as inspiration for the second episode – as she wanted to plunge people into that entity which she feared. “What is the hero’s journey?” EP Darren Aronofsky had asked her during pre-production, though. McNitt didn’t have an answer – since she didn’t have a hero. Only later did it occur to McNitt that the hero was the viewer. We all must fall into the darkness in order to find the light. 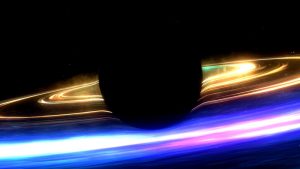 “Six degrees of freedom” is how McNitt described the beginning of part two – the participant can do what they choose. Only when you step into the “skin of the star” are you constricted, as you can only move your hands. This is the moment you are assigned your very first character, the director explained. Gravity trumps time, she also noted – as a minute in a black hole is a thousand years on our planet. And because the interior of a black hole has never been captured McNitt decided to consult astrophysicists at Columbia University to imagine something close to accurate. (Their advice – “just make it strange.”) At the point of singularity in the piece – in which space and time no longer exist – the participant then becomes a gravitational wave. By using the sound of your voice you can now trigger the sounds of the cosmos.

Engel then dove into the project’s (seven-figure) Sundance deal that “launched VR out of the tech world and into the filmmaking one.” Premiering the whole series at Venice – and winning the Grand Prix – only further cemented VR’s newfound status. Engel seemed truly passionate about virtual reality gaining a higher profile, and with that wider acceptance. With their third episode – Pale Blue Dot – they were able to cast Patti Smith as narrator, something McNitt still seems star-struck (no pun intended) by. With this final chapter McNitt took on the Big Bang – the beginning of time as we know it. To do so the director chose to controversially remove all sound from the start of the experience. Sound, she reasoned, was born 400,000 years later so only silence made sense. Waves from the cosmic microwave background were the earliest “whispers of the universe.”

One sound McNitt was particularly interested in, though, was the human voice. She brought up Stephen Hawking’s prediction that our species only has around 100 more years on this planet. She wanted us to be able to look back. A star lives for billions of years, time doesn’t exist for black holes – and we humans are the observers of the universe. And yet “we’re here for only a blink of an eye.” She stressed that, “We’re the ones who can listen to the sounds of the universe.”

Though Spheres is currently available on Oculus Story, Engel noted that it’s also showing in an immersive exhibition in Montreal – and come January will be a pop-up event in NYC. The pair are hoping to bring it to museums around the world as well. As the panel wound down and opened for a brief Q&A an audience member asked McNitt to pinpoint when exactly the whole production began. The director traced it all back to the day after the election – when she quit her job and moved to Japan, a country in which she didn’t speak the language. Feeling like an alien in every way, she started to develop the idea that would eventually lead to Spheres.

In total it was about a two-year journey that only began ramping up production last year. Engel guessed that each episode took around two-and-a-half to three months to make. McNitt then added that VR is not cheap – but that she finds people are willing to take big risks. Lisa Watts, Intel’s VR marketing strategist, was one of those daring backers who proved key. After receiving 100K from Intel to make a prototype – a “proof of concept” – the duo were then able to convince Aronofsky to come onboard. (As well as some genius foreign collaborators, I would add – including the Novelab auteurs behind my favorite VR piece of 2016 Notes on Blindness: Into Darkness.) As the audience shuffled out – many over to experience Spheres at the Virtual Reality Portal just blocks away – one revelatory takeaway remained in my brain. McNitt’s unbridled enthusiasm and down-to-earth speaking style – most likely learned from those Intel Science Fair days in which she had to tell a simple story about some head-scratching subject – will serve her quite well in our new Hollywood-meets-Silicon-Valley landscape.