(Wholphin No. 8 is now available. Go to the Wholphin website to subscribe to the magazine and order a copy for yourself.)

Short film lovers, rejoice! The time has arrived once again for the “DVD Magazine of Rare and Unseen Short Films,” aka Wholphin, to present unto you a new collection of some of the finest short work of recent memory. Though the times they are a evolvin’, it’s still incredibly difficult to get home video access to this oft-ignored form, and it’s virtually impossible to have films with this wide a stylistic scope to be compiled together on one disc. But that is the mission of Brent Hoff and Emily Doe’s ambitious project, which fills a sadly cavernous void. Wholphin No. 8 is another keeper.

(Note: Just to clarify, I’m writing about these in menu order, not in any order of preference, as you will soon discover.)

Short Term 12 (Destin Daniel Cretton, 22:00, USA, 2008) — Destin Daniel Cretton’s film deservedly took home the short film Jury Prize at the 2009 Sundance Film Festival. Short Term 12 has the emotional impact of a feature, showing one especially dramatic day in the life at a residential facility for abused and neglected children. Brad William Henke (Choke) is Denim, a supervisor who has his own issues, which we begin to fully grasp when one patient lashes out in fury after her father stands her up on her birthday. But this is only the beginning of Denim’s problems. Cretton shows a remarkable amount of tenderness and sensitivity with regards to not only his film’s heavy content, but his actors as well, making Short Term 12 the special achievement that it is. (Visit the film’s official website, where you can order a DVD that contains many bonus features.) 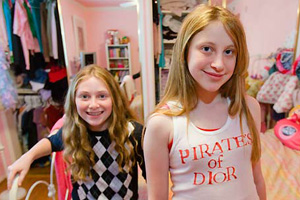 Kids + Money (Lauren Greenfield, 32:00, USA, 2008) — I have seen Lauren Greenfield’s jaw-dropping documentary a few times, and it never fails to send an icky shock to my system. Greenfield interviews teenagers in Los Angeles about their shopping habits, and what we find out about them is alternately infuriating, disgusting, and sadly revealing. On this last viewing, I was finally able to watch it with some level of remove and process it from a less severely judgmental perspective. The first few times, I was blaming these kids—especially the 11-year-old Megan, who comes off like a modern blonde teeny-bopper version of Damien in The Omen. But if one stops to consider how things were in their own middle and high school days, Kids + Money comes off as a grotesque extension of that. Still, why anyone would want to live in such a superficial, competitive, plasticized community is one thing that I cannot comprehend.

My Friends Told Me About You (Carlos Dengler and Daniel Ryan, 25:00, USA, 2008) — Ordinarily, if I don’t respond favorably to a film, especially when it’s situated within a lineup such as this one, I would just ignore it. But this thing deserves to be called out on grounds of Egregious Pretension. I was initially prepared to simply dismiss My Friends Told Me About You as a low-rent Inland Empire knock-off, but when I opened the accompanying booklet to read the filmmaker interviews (another perk of subscribing to Wholphin), I almost gagged. Carlos Dengler is better known as Carlos D. from the band Interpol. Clearly, he and his co-creator/director Daniel Ryan are aiming for a surrealistic, Lynchian universe, but what they don’t seem to understand is that David Lynch works from an emotional place that shuns the overtly cerebral for the inexplicably subconscious. Accompanying Wholphin’s interview with Dengler and Ryan is an essay in which Dengler pontificates about his film’s ultimate theme, the onset of celebrity. Had I not read either that essay or the interview, I might have given the film the benefit of the doubt, or ignored it at the very least. But this piece was akin to the unintentional confession of a murderer. While it’s certainly possible that I’m an un-intellectual dumb lug, My Friends Told Me About You nonetheless feels like the work of talented individuals whose inflated heads smothered their good intentions.

From Burger It Came (Dominic Bisignano, 7:00, USA, 2008) — Dominic Bisignano’s hilarious animated essay plays like an especially creative episode of This American Life, in which the filmmaker recalls a phase in his youth when he thought he kept contracting AIDS from the most innocent, un-AIDS worthy, situations. More than just a funny personal reflection, From Burger It Came speaks to that universal feeling of being a completely clueless child whose imagination has the power to run hysterically rampant and cause genuine trauma. If you can’t relate to this film, you’re either lying or are a complete weirdo. (Watch it here!) 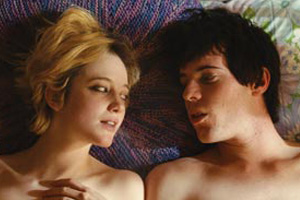 Love You More (Sam Taylor-Wood, 15:00, UK, 2008) — Artist Sam Taylor-Wood makes a nearly perfect directorial debut with this adaptation of a Patrick Marber short story. Though the film is set in England in 1978, its sexual explicitness is firmly rooted in the present, as two teenagers lift the new Buzzcocks single from a record shop and proceed to get down and dirty as the song plays over and over again. In contrast to much of the nudity in today’s independent cinema, which feels like the stunted behavior of individuals who are proving to themselves that they know how to press record on a video camera and take their clothes off at the same time, Love You More’s sexuality serves a hugely valuable purpose. In fact, it’s one of the more appropriate uses of graphic sexuality that I have encountered in a very long time. Usually, content like this works more effectively on the page, but Taylor-Wood just drills Marber’s script. In so doing, she has produced a gleefully sweet story of youthful awakening, both sexual and musical.

Hidden (Hanna Heilborn, David Aronowitsch, Mats Johansson, 8:00, Sweden, 2002) — The oldest film in this edition, Hidden is also the most haunting. The audio consists of an actual interview with an immigrant child in Sweden. The visual presentation is colorful animation that adds a layer of paranoia and intrigue to the situation. With his parents and newborn sibling by his side, Giancarlo tells of his troubling predicament. Scared and confused, he doesn’t fit in anywhere and is afraid to express himself for fear of being deported.

Great Man and Cinema (Jim Finn, 3:45, USA, 2009) — Researching his fascinating 2008 film The Juche Idea, Jim Finn stumbled into yet another shocking piece of North Korean propaganda. Great Man and Cinema is Finn’s own inventive slice of propaganda in which he celebrates the unheralded cinematic exploits of leader Kim Jong Il. This tribute, of course, is set to the punk rock song “Fucking U.S.A.” by Bay Area psych-poppers Neung Phak. Short, sweet, and very funny.

The Room Before and After, Part One: James Franco (Dave Eggers, 40:00, USA, 2009) — What might initially seem to be menu filler turns out to be one of Wholphin No. 8’s true revelations. Directed by Dave Eggers, the three-part series The Room Before And After features three different actors working on the exact same sets at different times, improvising their own scenes. Afterwards, Eggers interviews each participant to investigate the process that inspired their behavior. While Part 2 (starring Creed Bratton) and Part 3 (starring Maria Bamford) are interesting enough, they pale in comparison to Part 1, as James Franco arrives home and proceeds to kick the living shit out of a room over the course of one unbroken thirty-minute take. Franco is one of his generation’s most magnetic actors. Here, by reaching deep into a hideously carnal place, he proves himself to be a wildly creative physical comedian as well.