Okay, this might get a bit heady. Jonathan Rosenbaum has called it the “the most consequential zoom shot in the history of cinema.” It’s actually several shots, but if you ever get the chance to see it, it may occur to you what provoked Rosenbaum to say that. An altogether rare specimen, one that challenges our overly conditioned notions of what cinema can be, Canadian Michael Snow unleashed his startling and methodically rigorous Wavelength on the hermetic world of “experimental film” in May of 1967, exactly a year before the revolution that never really happened. In many ways it’s indicative of the zeitgeist that pushed the ’60s and its multifarious and unattainable meanings ceaselessly into the past. The quintessential structural film, a term its key practitioners, as they always seem to do in these situations, rejected over time, Wavelength proves once again that the value of any film, even a mediocre one, exists independent of whether people can actually enjoy it. I’ve sat in darkened rooms with other people and watched its austere mysteries unfold four times now, twice at the Lower East Side’s Anthology Film Archives, where it will screen again this Saturday night, and I’ve even watched its closing moments here on YouTube, and it never fails to enthrall and haunt me, to somehow redeem my boredom, to make me walk back out into the world with fresh, re-energized senses.

Wavelength is a forty-five minute trip through an eighty foot loft over the course of two days (in film time) that consists of perhaps eleven or twelve shots that are edited to seem, for the most part, as if they are one continuous shot. It asks you to bring with you your own meanings and preoccupations and thoughts — its narrative is treacherous, nearly non-existent. Over a wide shot of the loft, a pair of men move a bookshelf into a mostly empty loft for its owner, a well heeled woman. The room’s furnishings are minimal: desk, small yellow padded chair, corner bound heater, a few pictures. We push in. And in. We hear the sound of street noise, cars and trucks and people passing by, just barely glimpsed at the bottom of the loft’s four large windows. A hardware store is across the street.

Later, a pair of women come in. One smokes by the window. The other, the woman who directed the men earlier, plays the radio, wistfully listening to The Beatles’ “Strawberry Fields Forever.” Hollis Frampton, a fellow champion of the so-called structural mode, walks in and promptly dies in the film’s most cosmically funny, almost narrative moment. He lies dead and disappears as we zoom past, night becoming day, day becoming night, before the owner returns, finds him deceased, and places an odiously calm phone call to a friend about the distressing situation. Buzzing ensues. 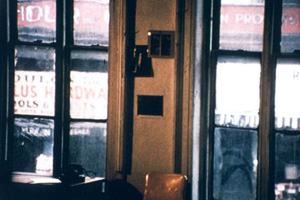 The color timing changes, going yellow, or orange, or pink, or negative, or superimposing, often at random, in many instances by the filmmakers’ applying colored lighting gels directly over the lens. The sound, which in its sine wave structure gradually moves from its lowest note (50 cycles per second) to its highest (12,000 cycles per second), in part informs the Wavelength of the film’s title. The picture of a rustling ocean, perched on a far wall of loft, our gaze centered on it for all of this film’s marathon-like forty-five minutes, is the other, its mystery and banality fueling the endless, pensive introspection the film provokes in the attentive (or perhaps unattentive) viewer. Artifice is everywhere, everything is finite, time stops for no one. In the very end, we never get where we think we’re going.

In careful retrospect, Wavelength’s appearance and critical reception represented the death knell to the romantic transcendentalism of what most people thought of as experimental film. The ideological underpinnings that had sustained the underground of the ’50s and ’60s, one that was thoroughly evangelized by Jonas Mekas in The Village Voice and manifest in the work of Maya Deren, Stan Brakhage, Kenneth Anger — among many other post-war American artisanal filmmakers — were largely discarded by Snow and his cohorts. One might see Wavelength as the end of film as text, as personal vision, as a system in which to see the world’s complex meanings with more clarity, except in and of its own intrinsic is-ness. Snow casts aside “vertical” filmmaking techniques pioneered by Deren, the woman who couldn’t sleep (a notorious speed freak) but wouldn’t stop dreaming, and occasionally by Brakhage, to firmly address cinema’s inherent and unalienable relationship with our perception of time. It rejected the perfected personal consciousness of the author as its principle formative conceit, a radical shift from the prevalent mode of the New American Cinema and of American counter-cultural consciousness in general. He undeniably broke new ground. Go see for yourself. Make them block out the exits signs for you and sit as close as you can. Trust me. You won’t forget it.

A Conversation with Adina Pintille (TOUCH ME NOT)