(Morgan Spurlock is no stranger to gross-out docs. His latest film is Rats and it’s showing this month on the Discovery Channel.)

I get creeped out by all sorts of creepy creatures but rats never really bothered me. That is until now, thanks to Morgan Spurlock’s new documentary (or, as he’s aptly calling it, “horrormentary”) Rats I will forever live in threat level Delta of these vermin. While Rats is interesting, thought provoking and current, it’s also terrifying for myriad reasons that I was never really forced to confront. The long and short of it is; rats are everywhere, they’re gross, they’re typically diseased, they’re smarter than us and they outnumber us.

Rats opens in, where else, New York City where the rats are a well documented issue. Here we meet a veteran exterminator who sparks up a cigar and proceeds to be a sort of narrator for the film’s 90 minute run time. Also while the cameras are in NYC we’re “treated” to city officials doing a sort of educational “rat tour” of the city wherein they point of countless rats running back and forth from garbage bags that are conveniently placed for pick-up right by sewer grates throughout the city. While slightly unnerving and rather unsavory, at this point, I was still pretty ambivalent about rats. Then the doc moves to New Orleans.

Here we meet scientists who trap and euthanize rats to study and keep tabs on what diseases they are carrying. As dawn breaks and the days catch starts to get dissected in a lab we learn that rats carry all sorts of disgusting and potentially fatal viruses that can easily be spread to unsuspecting humans. Let’s say you eat food with a little rat turd in it. You could catch a wormlike virus that attaches to your intestines and grows and grows and grows. And grows. This is where I started to get a bit leery of these little creatures but when a scientist pulls a giant, living fly larvae sack out of a living rat, it was all over for me. 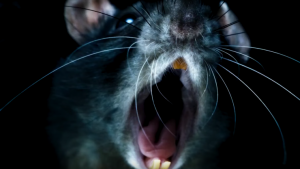 Rats is very much a horror movie, and intentionally so. There’s a John Carpenter-esque soundtrack as well as several jump cuts designed to make you twitchy. As the film moves out into the world we meet rat trappers in India who catch disease-ridden rats by hand while wearing sandals and whack them with a stick or simply ring their necks. It’s an intense few minutes as we’ve already been primed to know one rat bite can potentially cause any variety of illness (and, it freeking hurts!) so we’re on edge. Then things really get gross.

They also get a bit troublesome as we see rats being killed off in a variety of cruel ways. Neck snapping, drowning, the aforementioned stick beating as well as the age old rat killing technique of “smash with rock” are shown and it’s unsettling. Or, is it? Spurlock has never shied away from forcing us to face our own complicity in very bad things (eating copious amounts of fast food, wishing cruel and unusual punishment on a terrorist) and with Rats it’s a bit confusing seeing these creatures being dispensed with so flippantly. While yes, it’s sad and wrong to kill living things who aren’t actually seeking to do harm it’s also the equivalent of pissing into the wind because for every rat killed onscreen there’s 20 more that will live long, successful lives.

Throughout Rats I kept thinking back to rat horror movies of my youth (Ben, Willard, Food of The Gods) and wondering why we don’t get any good rat horror movies any more. Well, we have one now and it’s a documentary. And frankly, the truth about rats and their ability to quickly evolve past pesticides as they crank out litters of baby rats every 3-weeks is pure terror. They outnumber us, outsmart us and are getting hungrier. It’s just a matter of time.