and at Amazon Instant. It was distributed theatrically by Roadside Attractions and opened on July 8, 2011. Visit the film’s official website to learn more. NOTE: This review was first published on July 7, 2011, as a “Hammer to Nail Pick of the Week” at the Filmmaker Magazine blog.)

In December of 1973, a two-week old chimpanzee named Nim Chimpsky was taken from the arms of his mother and given to a human family in the hopes of settling a raging intellectual debate. In a famous study, the linguist (and now-famous political philosopher) Noam Chomsky had asserted that language acquisition was solely the domain of human beings, an innate quality existing within and discovered by humans through experience and exposure to language, which combined to trigger our “language acquisition device.” Several linguistic theoreticians challenged Chomsky’s assertion, most dramatically in a series of animal language studies in the 1970s that hoped to prove that, raised among humans and given the tools of linguistic expression, animals could indeed learn to convey their thoughts in language and communicate with humans. It was hoped that Nim, placed under the right conditions and care, could succeed where other language-acquisition animals had failed; perhaps he would be the one to prove that chimpanzees could, indeed, learn language and talk with humans.

James Marsh’s Project Nim is the devastating account of Nim’s experience in the care of human beings. Shunning a theoretical examination of the project to teach Nim to communicate using American Sign Language, Marsh examines the drama and intrigue of Nim’s all-too human handlers, exposing the deeply-flawed and exploitative “scientific method” that shaped Nim’s life. Those qualifying quotation marks are well earned; from the hippy-dippy family that take Nim in as an infant only to eschew any semblance of scientific observation (establishing instead an inter-species Oedipal drama), to the professor who uses Nim as a way to establish sexual relationships with his female subordinates, Marsh spares no one in exposing the parade of human foolishness that came shape to Nim’s experience. In doing so, Marsh pulls off a tremendous feat of non-fiction filmmaking, tying the audience closely to Nim and bringing us into a deeply empathetic relationship with his tragic predicament. 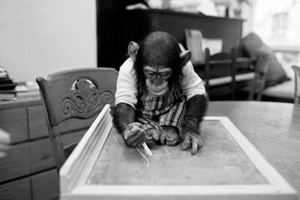 In order to bring us into Nim’s world, Marsh hews closely to the non-fiction style he established with his Oscar-winning Man On Wire. While that film used archival footage, stylized interviews and recreations to convey a narrative in the style of an espionage thriller, in Project Nim, the same techniques are used to craft an almost classical tragedy, a much more troubling story of an animal held captive not only by circumstance but by the clash between his animal nature and the expectations of his human handlers. Marsh’s recreations in the doc are especially powerful; presented primarily from Nim’s point of view, these sequences pull the viewer into the chimp’s experience of the world, from violent anger to melancholy and mischief.

While Nim’s life must certainly be viewed as tragic, Marsh does a great job of giving the human subjects of his film fair voice to express their own understanding and define their own actions. Some of these subjects, particularly the deeply wise and compassionate Bob Ingersoll, who worked with Nim later in the chimp’s life and forged a deep and meaningful connection with the animal, bring a moral gravity to the film which, given the lack of compassion shown by so many of the human subjects, proposes a more complex argument than a naive bad human/ innocent animal relationship. This is especially true given the fact that Nim himself is unable to communicate his true feelings to the audience; part of what makes the film so emotionally penetrating are the interpretations of Nim’s experiences by the humans who knew him, who interacted with him and who capably describe the depth of feeling the animal shared with them.

Too often, the value of a non-fiction film is inextricably tied to its perceived “moral” mission and meaning to audiences. What issue is the film trying to illuminate? Is it doing so by telling the truth in every instance? There are no shortage of examples of human misbehavior toward animals being illuminated in films, books and journalism; there are entire organizations dedicated to creating an sympathetic response in human beings toward animal welfare. To its tremendous credit, Project Nim does not presume to make a political case for anything more than the experience and feelings of its animal subject; there may be no more potent form of cinematic advocacy than bringing into full view the emotional life of a subject that is otherwise unknowable. Marsh utilizes the full arsenal of cinematic tools at his disposal, from fictional recreations to the emotional hearsay of human subjects, to give voice to an amazing animal who, despite his attempts at language acquisition, was never given a voice of his own.