(Christian Petzold’s Phoenix has been garnering serious buzz for some time now. After reading this excellent review, you can check the film out on Netflix. It will also be dropping on Criterion this spring)

Roy Andersson attended a screening of his magnificent A Pigeon Sat on a Branch Reflecting on Existence last summer in New York. After the film, Andersson stood all smiles in front of his slack-jawed audience (myself included) in perfect counterpoint to the unremitting beautiful bleakness of his deadpan “Human Trilogy” and its final chapter. In spite of the horrors depicted matter-of-factly in the tableaus Andersson so meticulously creates he said his work comes from a “radical humanism” and indeed the light that breaks through the dark is what elevates his work from unadorned miserabilism to meditative bliss. Andersson, born in Sweden in 1943, said that, to this day, he can only make work cast in the infinite shadow of the Holocaust — that it is the event that defines his films and our time. The audience hushed here and said nothing; a thought beyond words.

Andersson’s comment lingered when watching Christian Petzold’s masterful Phoenix, itself a work that nearly defies description. Phoenix — a film about mistaken identity, misplaced guilt and misguided affections — shows that love cannot always conquer all, that in the face of the most implacable hatred, everyone has a breaking point, and that of the unspeakable, something must be said.

Nelly Lenz has survived Auschwitz and returns to Berlin to be reunited with her husband Johnny, her face so scarred that upon first meeting at a nightclub, the titular Phoenix, Johnny does not recognize her and so she flees in dismay. Her only friend Lene learns right from the outset that Johnny betrayed Nelly, divorced her, effectively signing her death certificate over to the Nazis in order to save himself. Nelly either does not believe Lene or more plausibly simply denies this reality. Nelly’s denial of Johnny’s betrayal is only matched by Johnny’s denial of Nelly’s existence; after they finally meet he is certain she is a lookalike of his dead wife and enlists her to help him collect the retribution money, so impossible is it for him to believe that she could have survived that it is more likely he’s met her doppelganger.

And herein lies the boundless depths of Phoenix. Joan Didion famously said “We tell ourselves stories in order to live” and it’s through these stories we tell ourselves —and not each other — that we learn how to be alive, each marooned in our own first-person narrative. Nelly confides to Lene that the story she told herself while in Auschwitz was that one day she would reunite with Johnny, that that was the one thing that kept her alive. In turn Johnny has clearly buried his murderous act and refuses to unearth it. And it’s this chasm that makes up the film’s conflict: Johnny denying Nelly’s existence, trying to make her up as “Esther,” a Nelly stand-in and Nelly’s desperate yet wholly futile attempt to make Johnny see her humanity, her very existence, right there in front of him. 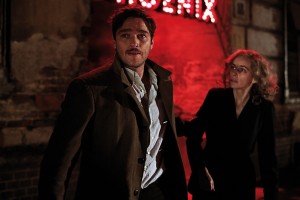 In a pivotal scene, Phoenix recalled another film of doubles and conjured spirits, Hitchcock’s Vertigo. Johnny has made up Nelly in her own image and when he returns home he is aghast at the resemblance, overcome by grief and guilt (though his repression is so all-consuming he does not know it). In the classic scene in Vertigo, Kim Novak emerges as Judy as Madeleine, smoked in a green mist, and in the cameras swooping move that enshrouds Scottie and Judy/Madeleine, identity is erased, and the ideas we thrust on those we love take hold, the dream world subsuming the real. Similarly in Phoenix the stories Nelly and Johnny tell themselves in order to live are too powerful and the reality too impossibly hard to take that both choose to believe the narratives they’ve written for their own lives —people as islands.

None of this would convince if not for the aching layers peeled off by Nina Hoss in her portrayal of Nelly. Hoss has worked with Petzold numerous times before (recently in the excellent Barbara) and it shines through in the infinite despair, in the glimmers of tortured hope of her performance. Ronald Zehrfeld’s brutish obliviousness never falters as Johnny and Nina Kunzendorf’s wounded stoicism as Lene grounds Hoss’s Nelly but ultimately this is a movie about a woman grappling with the nadir of history and emerging from its molten ashes and in every way Hoss meets the challenge of the material and redefines it — resplendent in ache and terror, ineffable.

Everyone in this world is living in the aftermath of something that defies understanding, that literally goes beyond our imagination or knowledge of ourselves and our realities, both shared and private. Those who evaded it need not to see it; those who have the luxury to forget must. But that is not possible for Nelly, and this is what I believe Andersson alluded to, and it comes through in his “Human Trilogy”; when one character onscreen knowingly looks through the camera at the audience in his films (in what is often the most tortured moment in the work), it forces the character, the filmmaker and the viewer to acknowledge their complicity. In Phoenix the carnage is so fresh, the bodies not yet cold, the grief not close to understood, that there is only a shocked numbness, a lack of recognition to what now distant memories of being alive can evoke. The only hope, for Nelly as with others, is to share a perspective, to bring others into the dark light to see the same tarnished world. In what is one of the finest, most powerful endings in a film I have ever seen, Nelly ensures that she is heard, that she is finally seen, that she will be known. Watch it and be overcome by the mortifying humanity of it all.