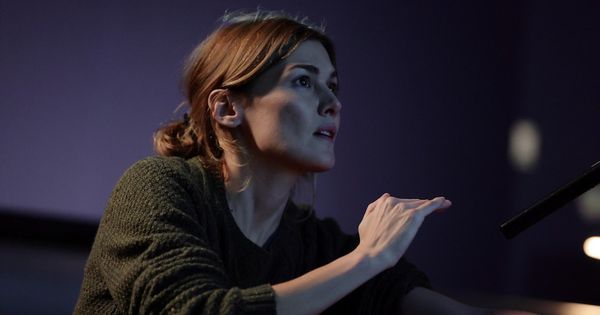 Sometimes you feel a little off in your life, like everything‘s happening a little too fast and you’re racing to catch up. We say we feel ‘out of sync.’ If you are someone who works as a sound effects artist then you can measure exactly how many nanoseconds you are out of sync. This is the premise of Juanjo Giménez’s Out Of Sync, the Spanish film that opens with the film professional finding out that the timelines she keeps turning in are out of sync, though they sound right to her. As the woman investigates her condition, she realizes she can clap and hear the sound three seconds later. She times every noise in her apartment and charts it, watching herself drift further and further out of sync with the rest of the world. However, there is a nice side effect, she seems to be able to tune in to anyone’s conversation, pulling it out of the mix of the world. Later she realizes when she walks to a space, she can hear the sounds of what happened there before she got there. This is not super convenient, and she catches snatches a conversations that she wasn’t supposed to hear and has a difficult time communicating with anyone. Eventually her coworker resorts to a whiteboard and trading messages because at least that can happen in real time.

I like to think of a film like this as miniature superhero origin stories. I mean it’s not convenient to have web serum shoot out of your arms until you learn how to use it. In this film we are seeing the very first days in minute detail of somebody stumbling into what seems like a handicap but could in the long run turn out to be a superpower. It’s a bit like 2017’s Thelma from Norwegian Joachim Trier. Out of Sync is executed with infinite precision. We spend every second of each scene watching our protagonist try to unravel her predicament. We watch as the film goes further and further out of sync for the viewer. We pick up clues from passing buses that open the scene, but we don’t hear for another three seconds. We lament as she struggles with her mother’s funeral and the well-wishers giving their condolences but hearing the condolences of the last person in line. We get to experience the film in the same way she does and that’s part of the brilliance of the story.

Where we end up with is a drama with a bit of a love story all in the shadow of some sort of super-powered thriller. By the end, when she’s trying to track down her origins, it feels a little bit like Wolverine. Of course, no hand to claw combat but that same need to understand why you are what you are. This is a film that could only be made in Europe. It’s far too subtle for American producers but that’s a shame because the film does one of the best jobs I’ve ever seen of breaking down somebody trying to understand new information about themselves. Performances are solid, the cinematography is just fine, but of course the real star here is the sound design. I can’t imagine what it would’ve been like to work on a film for you were intentionally putting things out of sync and trying to decide how far you can move things before the audience will not understand what is happening.

I highly recommend this film and from the final shots I might recommend that Nick Fury knock on her door.