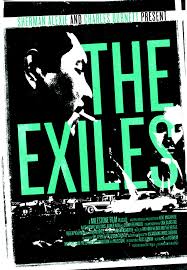 In his seminal 1973 book The Country and the City, Raymond Williams lays out the great divide that he suggests exists between the concepts of “Natur[al]” and “native.”

With apologies to Williams, a principle progenitor of “cultural studies” as an academic discipline, we can posit a feeble concision of this distinction that otherwise takes the author nearly 300 pages of turgid historical synthesis to approach in his text: In contemporary terms, “Nature” is the marketable, watered-down version of what is “native.”

It is the difference, Williams goes on to write, between an actual “landscape” that might be dirty, gloomy, evocative of hard work, despair and drudgery on the part of workers of a seventeenth-century farm … and “scenery,” which would be the romanticized pastoral painting made of the same plot of land (brighter, cleaner and typically eliding those pesky peasants sweating, cursing and laboring away to make the farm function).

So too does the young British filmmaker Kent MacKenzie work in 1961’s The Exiles toward revealing such a disparity between the genuine experience of a group of twenty-something Native Americans over the course of a 12-hour evening in Los Angeles’ Bunker Hill District (made notorious by the books of Charles Bukowski and Raymond Chandler) circa late 1950s … and the grossly misleading Hollywood image of said community that had otherwise been perpetuated for years on both the small and large screens.

As with On the Bowery, we have here a seamless fusion of documentary and narrative filmmaking, with MacKenzie – a recent graduate of USC’s film school who focused on the developing Bunker Hill area and the lives of young adults for multiple projects throughout his prolific career as an inveterate truth-seeker – shooting a scripted storyline based on authentic anecdotes contributed by the non-actors he cast in the film who essentially portray themselves.

What follows in a syncopated version of real-time is the interweaving stories of Yvonne, Homer and Tommy, punctuated by the voice-over of actual interviews with same. 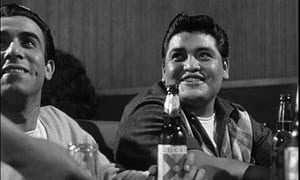 This is the environment in which we find our “protagonists,” so to speak, living out their humdrum quotidian existence in a manner that – as an incorporeal narrator opens the film with a montage of historical photography of Natives explains – “reflects the life that is not true of allIndians today.”

It’s a refreshingly honest self-appraisal to begin a film that Christina Rose of the Indian Country Today Media Network called the “the first accurate portrayal of urban Natives” as recently as 2014.

The corollary tales of The Exiles are set into frenetic motion when dedicated homemaker Yvonne – whose only aspiration is to have/raise a family and be content in the big city away from where she left the reservation years earlier – is dropped off downtown where she can catch a movie. The boys peel off in their black convertible, cackling, hooting and hollering along the way.

Off they zoom – Homer, Tommy and others they meet up with such as Rico – to seek out beers, girls, dancing, gambling, playful (for the most part) fisticuffs and whatever other exciting indulgences they can scrounge up during the evening ahead.

Each of our leads are clearly influenced by the rock-and-roll fashions of the time – slicked back hair, teenage hipster jargon and the music of Fats Domino, Link Wray and – mostly – diegetic music by the film’s surf-rocker house band, the Revels, playing off jukeboxes and car radios, American Graffiti style.

As the characters split up – Yvonne eventually wandering the tenebrous LA streets alone, gazing longingly into store windows filled with glamorous mannequins; Homer drinking beer by himself in various bar corners; Tommy chasing after whatever girls he can cajole into coming with him – we are privy to a kind of stream-of-consciousness experience of each cast member.

Voice-over testimonials continue to present each character’s own take on why he or she left the reservation for presumably better modern-era opportunities in LA.

References are made to elegiac memories of a simpler time back home, paired infrequently with halcyon visions of their families (significantly, during the bright, sunny day) and to the constant questioning of whether having left was the right decision or not.

Hellion Tommy at one point compares his life to a merry-go-round in his voice-over testimonial. It doesn’t matter if he’s in jail or not, he goes on to say, it’s all the same day-in/day-out. He’s clearly able to find amusement wherever he goes, laughing, drinking, dancing and strong-arming guys and gals alike on his further quest for cheap entertainment.

Later, Yvonne somberly shuffles her way to a small apartment close to where she and the boys live, popping in to visit a friend who takes her out from the lonely cold of night. We quickly get the sense that Yvonne’s smiley, chain-smoking compatriot may be her only real intimate connection in the city away from the boys who are clearly always running off on their own.

Along with a few new girls they’ve found, the boys drive up to what they call “Hill X,” a grassy clearing atop a windy mountain road where a community party is taking place. It’s also where, as Homer puts it in his voice-over, Natives can go to “really tear loose,” be themselves and not have to worry about being overly scrutinized by the outside world. 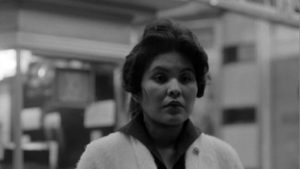 Under the sidereal blanket of velvet sky splattered with fluorescent stars, the jubilant gang once again dance, drink, laugh, fight and now also create a drum circle, crowing and calling out to the artificially-illuminated city so far below.

A time lapse ushers in the morning, the sun bright and waking up Yvonne in bed with her friend who generously took her in the night before. Yvonne peers out the bedside window and sees the boys pulling up to the neighborhood in their convertible…before getting out and wobblingly walking away, in search of more easy amusement on what will ostensibly be the continuation of Tommy’s ever-spinning merry-go-round.

As the characters in the film grapple with their sense of individuality vs. community, enjoying the city night life vs. reminiscing about “simpler times” back home and assimilating to the city while holding fast to their revered heritage, they once again reflect a notion elaborated in Williams’ The Country and the City.

“Adam Smith [early proponent of capitalism] … saw the city as securing and extending the industry of the country: a centre [sic] of freedom and order but in its very dependence as a market and manufacturing centre liable to breed a volatile and insecure people,” Williams writes.

There is an absolute acknowledgment of this volatility and insecurity of those populating The Exiles in a manner that Kierkegaard may have called “fear and trembling” or Hunter S. Thompson may have called the modern malaise of “fear and loathing.” The freedom and liberation exhibited by our cast in The Exiles is mitigated by their fear, anger and discomfort at who they are and where their lives are going (or, more to the point, ostensibly not going).

So, while Yvonne is sitting alone in an empty movie theater mesmerized by a cinematic other-world or Tommy and his gang are tooling around the streets fast and wild, drinking, driving, spraying arching bursts of incandescent cigarette embers across the screen as they go, they all have in common the needful reconciliation of being at once alone and together as a community, voluntary “exiles” from their original homes while doing what they can – in looks, language and attitude – to be part of the city into which they’re ingratiating themselves.

Befitting its motif of lostness in the hustle-and-bustle of the big city, The Exiles would premiere at the Venice Film Festival in 1961…only to be exclusively shown in its initial run at churches and schools as something of an educational aid. The film would otherwise become a forgotten artifact of its time, only to be rediscovered and released commercially nearly 50 years later in 2008.

The Exiles can therefore now be seen by the general public and take its rightful place as a leading light in the continuum of similar films that portray or attempt to portray a realistic depiction of indigenous persons coping with the inner-embattlement between individuality and community, modernity and tradition, the urban and rural that exists in such later works as Sherman Alexie’s Smoke Signals, the criminally underseen On the Ice, New Zealand’s Once Were Warriors and more mainstream fare such as Whale Rider and the recent Wind River.

As Williams wraps up his historical analysis of the centuries-long tension existing between life in the country and life in the city, he solemnly laments that the latter experience in the twentieth century “was now becoming so widespread, and writers, disproportionately, were so deeply involved in it, that there seemed little reality in any other mode of life; all sources of perception seemed to begin and end in the city, and if there was anything beyond it, it was also beyond life.”

Moving beyond this city life, at least that of On the Bowery’s Manhattan and The Exiles’ Los Angeles, we journey forward next week to the expansive southwest in Martin Scorsese’s 1974 mélange of family drama, seventies’ road movie and mother-and-son buddy comedy, Alice Doesn’t Live Here Anymore.

MATHEW KLICKSTEIN is (for the time being) a Boulder-based writer/filmmaker who recently completed and has been touring his documentary on 80s/90s TV icon Marc Summers, On Your Marc, to be widely-released soon. His next book, Springfield Confidential: Jokes, Secrets, and Outright Lies from a Lifetime Writing for The Simpsons (co-written with lifetime series writer/producer Mike Reiss, foreword by Judd Apatow), will be released through Harper Collins this June. You can keep up with his regular shenanigans at MathewKlickstein.com.