(OK, Good is now available on VOD through Cinedigm and Slamdance. It world premiered in the Narrative Competition section of the 2012 Slamdance Film Festival. Visit the official website to learn more. NOTE: This review was first published on January 23, 2012.)

It opens abruptly with casting footage—four regular-guy types being put through the motions. Right profile, left profile, hands, hands—it looks a lot like getting booked into jail. This is the first of a series of auditions in which unseen casting agents make the kind of cryptic demands that casting agents make; the actors are seen complying in crummy lighting, through the artless zooms and pans of casting cameras.

The look of the film is suitably brutal: now we see Paul framed against the generic vertical blinds of his boxy apartment; now a hideous piece of department store art juts into the frame as he paces back and forth. A massive, solid-beige wall rug dwarfs him as he waits to go into an audition. Martinico has a painter’s eye for telling his story and conveying emotion with colors and textures, dropping in close-ups of angrily bubbling yellow eggs or quivering ramen in a pan, or a dreamy, low-angle traveling shot through the tunnels on the Pasadena freeway. 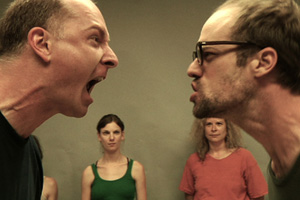 Paul’s commitment and drive (echoed by the motivational tapes he plays in the car) are somewhat comical as applied to the uber-banal lines of the TV ads he practices and auditions for. In a sense his guileless ability to sell a better potting soil, or “an experience, an adventure… memories that’ll last a lifetime,” make him seem like an anachronism from a time before the Great American Cynicism. But he’s so earnest, his desire is so palpable, that you’re helplessly drawn to his cause. Armstrong’s performance is a thing of beauty—both muscular and delicate, specific and frighteningly real.

Paul’s ambition seems connected to a desire to be seen, to have his existence acknowledged. Early on he sits on the floor surrounded by hundreds of his smiling headshot selves; later, he practices looking into the mirror repeating, “Hi, I’m Paul Kaplan.” A series of workshop scenes—an extreme example of the “getting in touch with your primal feelings” exercises typical of acting classes—introduce an element of savage ballet, a sense of tortured souls trying to escape their pain. They also provide a kind of wordless commentary on Paul’s evolving story.

Gradually, Paul’s confidence erodes. He struggles to explain and assert himself in a running dispute about his headshots, getting nowhere with the expressionless drones at Noho Copy. He starts flubbing his lines in auditions.

The film pivots on a scene where he’s given an opportunity, by one of the mysterious people behind the camera, to show what he can do on his own terms. He launches into a stirringly heartfelt monologue from Conan the Barbarian (!), which seems to fatally connect him with his own sense of loss and anger and sorrow, and propel him into the film’s grueling/cathartic final act—which is as much about struggling to find something, anything below the surfaces of things as it is to express his rage.

Throughout, seemingly random and incidental images, sounds, and snippets of dialogue all contribute to create a story and a world. OK, Good is ultimately about one man’s effort to succeed on his own, through sheer dedication and willpower, and how he crashes on the rocks of his own vulnerability. It’s also a film about the state of the American Dream, and our collective impotence as we confront a system that seems to have been thoroughly taken over by dark, unseen forces.

Sorry, the comment form is closed at this time.