Niko is an antihero for our times: a gentle, chronically pained 20-something pretty boy defined above all by his inertia. When we meet him, he’s trying to quietly escape from his girlfriend’s bed in the morning; after casually making up several excuses for why he needs to leave and why he can’t see her later, he comes clean with a wonderfully layered, wordless look—a shamed admission of his own indifference.

His life begins to unravel—the reinstatement of his driver’s license is denied by a sadistic bureaucrat; his bank card is swallowed by an ATM right after he gives the last of his change to a homeless man—leading to a funny moment in which a passerby busts him trying to take his money back. But the worst is yet to come.

Niko meets his dad, Walter, for a round of golf, and endures a series of small humiliations in an attempt to find out why there’s no money in his bank account (when Walter advises him to “imagine who you’d like to smack over the head with that club,” there’s no doubt about who he thinks of). Finally, Walter drops the bomb: he’s found out that Niko dropped out of law school. “My question to you, Niko, is what have you been up to the last two years while I’ve been transferring money for your studies every month?” “I’ve been thinking,” replies Niko. His dad strides off, and Niko is left to pocket a few bills, the last of his financial support. 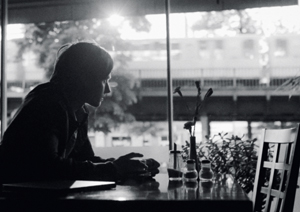 Niko endures it all with Buster Keaton stoicism; as played by rising German star Tom Schilling (Before the Fall, Mein Kampf) he’s an quietly charming abyss of vulnerability and uncertainty. He seems to be a magnet for type A personalities with their heated passions and drives, and he has a genuine empathy for them, a sense of obligation to hear them out, a sense of inadequacy in not being able to act and feel with that kind of intensity himself. “You know when you get the feeling that the people all around you are kinda strange somehow?” he asks, rhetorically. “But when you think about it a little longer, you realize it’s not the others, but you.”

Schilling and first-time writer/director Jan Ole Gerster have created, in a sense, the ultimate straight man: a character whose passivity and sense of futility become a perfectly black trampoline for everyone he meets. The film unspools in a series of funny/painful vignettes—with performances by a carousel of brilliant character actors that consistently hit the sweet spot between naturalism and caricature.

With no direction and no plan, Niko is left to tag along with his friend Matze, an energetic and adventurous character who shares Niko’s suspicion that everything is meaningless, but spins it with a sense of lightness and bemusement. While they’re at lunch, they’re approached by Julika, a bubbly young woman who turns out to be the (now thin) obese girl that Niko teased in high-school. 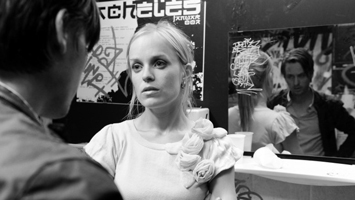 Somewhat counter-intuitively, Gerster shoots this modern story in glossy, elegantly-composed black and white reminiscent of mid-20th Century films, with a languid, saxophone-driven score. It echoes a lost time of genteel European-ness, a time when a gifted young man might have had time to spend just “thinking.” But the film also has a savage sense of humor, satirizing both mainstream German films and avant-garde theater. Gerster manages to wring blackest comedy from a man’s grief over his wife’s mastectomy, and the resolution of Niko’s budding romance with Julika is both grotesque and hilarious.

Oh Boy does what it does with astonishing mastery, but a story like this often ends up with an overly tidy Hollywood ending or a dry, existentialist, art-house non-ending. Instead, Gertner creates a final act that downshifts and digs several layers deeper into his discourse, finding a subtle, penetrating light to shine backward on the darkness Niko has been walking through.