Two weeks back America was reminded of the horrifying and devastating Hurricane Katrina disaster which happened just ten years previous. While many other areas were affected by the brutal storm front as well (Mississippi, Alabama, Florida) New Orleans seemed to get hit the hardest both in terms of sheer damage done and the affect the catastrophe had and still has on this wonderful city. It’s almost saddening to think that America needs to be “reminded” of what happens when powers of corruption meet our countries inability to address poverty but a new docu-series from Time entitled New Orleans Here and Now makes that bitter pill a little easier to swallow by showing us people who have stuck it out in The Big Easy and tried to get on with life as usual. Executive Produced by Patricia Clarkson and Scott Bakula with Christine Vachon’s “Killer Films” and the newly formed “Field Office Productions” (which features Noah Stahl and Michael Gottwald, producers of The Ross Brothers doc Western and Beasts of the Southern Wild, respectively) producing New Orleans Here and Now is six short documentaries focusing on various survivors of Hurricane Katrina. All six shorts are pretty fantastic but I’ll include the ones here that resonated the most strongly with me. First up is The Boatman by Zack Godshall. The short focuses on Joseph Gonzales and his wife of 71 years Selina and it’s a truly powerful 12-minute film. Named for the fact that Joseph has a boat he’s been trying to finish for years but that’s become difficult as he’s nearly blind, the story deftly covers other areas of loss from the storm as well as unique looks at rebuilding and what that means. While it’s incredibly moving to realize Joseph will probably never finish his boat the film offers up a tearful knock-out blow as Selina shows us all the photos and photo albums that were destroyed in Katrina. While she now keeps a ready-to-go backpack full of photos it’s devastating to see the look on her face as she flips pages on a destroyed album that once held pictures of many people no longer with us, including the couples daughter, Joy. But rather than wallow in the sadness of these losses the film is also on-hand to capture the couple renewing their vows for their 71st wedding anniversary. Three generations of their family reunite and the shrimp boil party alone made me nostalgic for American’s finest city. The Boatman is the definite “must see” of the six films. 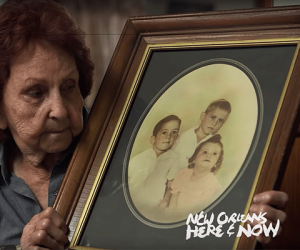 I also very much enjoyed Everything to Be Continued directed by Lily Keber which is basically a day in the life of a New Orleans brass marching band. The band is your classic horn section and drums and they’ve been together since High School. Yet after Katrina they were literally disbanded as members scattered to nearly every country of the U.S. to try and rebuild their lives. But now they’ve come back to New Orleans and are working their asses off with up to four gigs a day. The personalities in the band alone are probably strong enough to make this a feature but I loved the one-day approach where we see the band playing a street corner before heading to a wedding, a bridal shower and then a last minute gig at a club. Imagine lugging and then playing your tuba for 8-plus hours a day in sweltering New Orleans humidity. Quite a feat. And again, Everything to be Continued could have been a bummer of a story about a band unfairly broken up by a disaster but instead Keber makes it about the now and the push for normalcy a decade after Katrina. Producer Stahl said the piece was commissioned for the anniversary of Katrina but there was more to it than that. Said Stahl “I’d point out that all of the filmmakers either live in New Orleans or have some meaningful connection to the Gulf region.  We deliberately stayed away from a house style and encouraged six distinct points of view and storytelling styles, and I think the series shows that, in a way we’re incredibly proud of.” 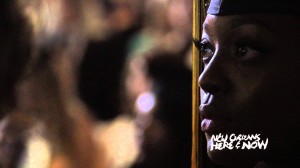 The other shorts in the series are also excellent and include Darius Clark Monroe’s Two Cities which tells the story of Dr. Mtangulizi Sanyika and his quest for “home” and what that means post-Katrina, Angela Tucker’s The Older Fish about four graduating High Schoolers who are on their way to being prominent artists but who were 8 years okd when Katrina struck, John Maringouin’s The Best Eva which turns a lens on New Orleans based female boxing champ Tiffany Junot and Katie Dellamaggiore’s Labor of Love which chronicles Karl Takacs Jr. and his wife Laura Hebert’s efforts to get their once thriving family restaurant back into New Orleans. While efforts are being made to release the films on iTunes, Amazon, Hulu Plus and Sundance Doc Club the series can currently only be viewed behind the Time paywall. This is a real bummer as New Orleans Here and Now is vital viewing for its fresh look at New Orleans now as well as a valuable keepsake for New Orleans and its citizens new and old, still in the city or trying to get back. I’m of the opinion New Orleans should never be too far from anyone’s mind anyway and this film will remind you what a wonderful city it is and of its value to the American cultural fabric. –Don R. Lewis (@ThatDonLewis)