[Neighboring Sounds was picked up for distribution by Cinema Guild. It screens at Cinefamily April 6-11, 2013. It won the FIPRESCI prize at the 2012 International Film Festival Rotterdam. Its American premiere was at New Directors/New Films. It next screened at the LAFilmFest 2012. Full disclosure: Paul Sbrizzi is an Associate Programmer at the LAFilmFest.]

At a film festival, the ultimate high is seeing a film that puts on the hierophant’s robe, grabs the baton, and takes form and meaning forward and deeper, to convey something painfully, thrillingly present-tense. In Neighboring Sounds, Brazilian filmmaker Kleber Mendonça Filho picks up threads from Buñuel and Kubrick to weave a quietly devastating satire of the late-stage decline of the middle class, in a style all his own. Come December, it will likely be recognized as one of the defining films of 2012.

The credits are at the top, on a silent-movie-style title card, followed by a series of black-and-white photos, the relevance of which will not be revealed until literally the final scene. A gliding shot of kids skating through a parking garage is soon followed by the kind of camera zooms not seen (outside of Bollywood) since the heyday of Bertolucci. Medonça Filho has a boldly personal film language: his camera is a cool and somewhat menacing presence, making sneaky, unexpected movements to stalk its subjects. The film is full of fresh cinematic ideas and approaches: using dissolves to cut between shots within a scene; matching a shot of a cityscape with a cluster of empty beer bottles; ambling along at a leisurely pace and then cutting away abruptly after a shocking image.

Neighboring Sounds takes place on a street in an upscale neighborhood of Recife in Brazil, and centers on João (Gustavo Jahn), a melancholy and seemingly gentle real estate agent who we soon find out has forced his housekeeper to retire at age 60. He’s the grandson of Seu Francisco (W.J. Solha), a forceful patriarch who owns a sugar mill in the country. João’s cousin Dinho (Yuri Holanda) appears to be the one family member to have inherited the grandfather’s sense of entitlement and grandeur, but he’s a loose cannon with a crazy look in his eye, always spoiling for a fight, and he’s been stealing CD players from cars parked on the street.

The damaged heart of the film is a neighbor named Bia (Maeve Jinkings), a perpetually stoned young mom, forever staring into the middle distance with a sense of resigned dread as a neighbor’s dog yelps and howls. Bia has some of the funniest scenes—exhaling pot smoke into a vacuum cleaner nozzle; quietly tripping out to “Crazy Little Thing Called Love” as the dog barks in the background; getting into a hair-pulling fight with her jealous sister when Bia buys a bigger flat-screen TV. 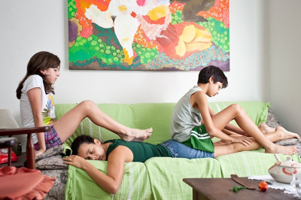 Throughout the film, the recurrence of buzzing, rumbling sounds represents a hidden presence encroaching on the characters’ privacy and safety. Shortly after a car gets burglarized, a working-class man named Clodoaldo (Irandhir Santos) shows up with a smooth sales pitch for his security service—and a suspicious knowledge of João’s family. João and his upper-class neighbors are used to treating their service people with amused condescension—Seu Francisco asks a member of the security team what neighborhood he’s from, and laughs heartily at the man’s answer—but once the service is hired and settles in there’s a sense of a power shift between the classes. While the members of João’s condo association squabble and fret over money and agonize about whether to fire a surly doorman who sleeps on the job, the underclass is busy getting organized, modeling itself on modern corporate capitalism: a veneer of polished customer service belying a cut-throat agenda. The streets are now controlled by the security men and their allies, leaving the residents increasingly paranoid and isolated in their homes.

Mendonça Filho sometimes meanders away from the narrative completely, like when João takes his new girlfriend out to his grandfather’s country estate: there’s a dreamy extended sequence of the couple exploring the big, shuttered house and the surrounding grounds. Here, Neighboring Sounds conveys an almost tactile sense of what it’s like to be a young heir in a family of declining wealth: the characters float through long-unused rooms and hallways, and hear mysterious footsteps above them. Later we hear horror movie music and screams as the couple explores the ruins of an old movie theater—an abstract foreshadowing of the film’s denouement.

The film’s bold, cool style as well as its subject matter make for an interesting comparison with Dogtooth. Mendonça directs a similarly dark and wry sense of humor at the isolation of his own social class, constructing surreal scenes from naturalistic elements, but he dials the humor back to a homeopathic dosage. In Lanthimos’ film, freedom was right outside the property walls, waiting to be discovered; here there’s really no escape. Where Dogtooth felt like a good laugh with a smart new friend, Neighboring Sounds is like a brooding stranger who might turn on you at any moment.