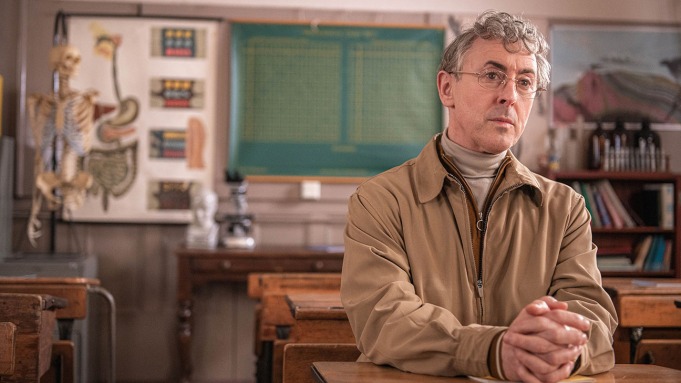 (The 2022 Sundance Film Festival ran January 20-30 all virtually. Check out Melanie Addington’s movie review of My Old School. Like what you see here on Hammer to Nail? Why not pay just $1.00 per month via Patreon to help keep us going?)

Sometimes when an independent film fails, a stranger than truth documentary can arise from its ashes. In My Old School, the director Jono McLeod, navigates a tricky subject by replacing him visually with actor Alan Cummings who mouths the words of Brandon Lee, not not actor from The Crow, but new student Bearsden Academy in Glasgow in 1993.

Cummings, originally slated 25 years earlier to play the subject in an independent narrative version of the story, opened up the film at Sundance to discuss how that project fell through and why he got to play such a pivotal role in the documentary.

It is a tricky film to write about without spoiling the numerous twists to this story, however, of note is that two distinct time periods play a critical role in the film, the 1990s and the 1970s. With many flashbacks rather than actual footage, the animation style deeply reflects iconic cartoons from Scooby Doo to Daria.

Brandon Lee had just died when enter a new student into Bearsden Academy in Glasgow. Looking a bit different from the other students, new Canadian transplant Brandon Lee greets his fellow classmates. Maybe a surreal story idea if it were a narrative, as a truer than fiction documentary, it is somewhat tame for crime documentaries, but is framed in such a kind way that it stands out.

With the first half of the film setting up the basic story introducing the former students, teachers, explain the background of the neighborhood, the film eases into the main reveal. While most of the neighborhood is reflected only in animation style, they paint a picture that makes it clear this is an affluent community.

With most of the subjects willing to open up and be paired with other classmates, the return of childlike gossip and humor is mixed with adult perspective looking back at the strange two year experience.

In the end, this sweet documentary is a playful look back at a weird story, but more importantly, reflects a larger issue of how memory is influenced to better comfort our selves. As the director reveals real footage that the former students all fondly recalled, the truth of what happened brings back the truth behind their own false memories.

Jono McLeod began his career as a roving reporter for Scottish TV news before moving behind the camera at BBC Scotland.  This is his first feature and My Old School is seeking distribution after its Sundance world premiere.