MOST LIKELY TO SUCCEED 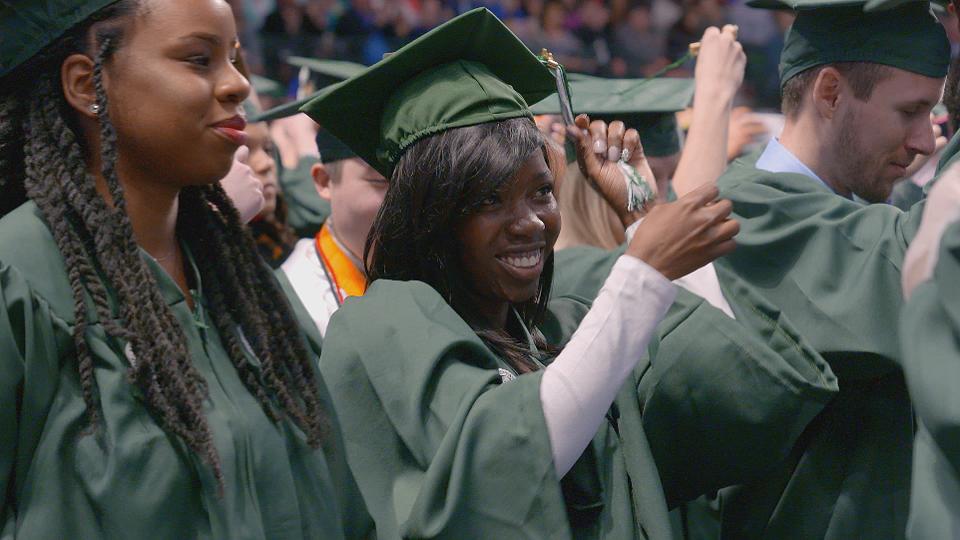 (Pamela Littky’s Most Likely to Succeed looks at ten defining years for four individuals to explore the concept of success and the ups and downs of everyday life. It is available now on VOD via Level 33 Entertainment. Like what you see here on Hammer to Nail? Why not pay just $1.00 per month via Patreon to help keep us going?)

“Success” is an abstract word and the measure of it is entirely relative. However, there are a couple of benchmarks that most “success” stories have in common including financial stability and steady employment. In her debut documentary, Pamela Littky (a photographer known for her candid celebrity shots) follows four high school seniors from different backgrounds who were all voted Most Likely to Succeed by their graduating class. Littky checks in with her subjects during formative moments over the course of a decade as their plans shift and their perspectives change and broaden. The result is a thought-provoking meditation on privilege and a compelling case study on what it really means to pull oneself up by one’s bootstraps.

Littky’s subjects are two working-class African Americans from Michigan, one white middle-class girl from Florida, and one affluent white boy from Los Angeles. In Detroit, we meet Charles (who goes by Disco), an athlete who was born with a drug addiction and became independent from his adoptive parents his senior year of high school. He looks forward to getting a job and building the family he never had. Quay lives with her single mother who suffers from a heart condition, and all she really wants is to be able to support her family with steady employment. Sarah’s parents are both pastors and her biggest concern when moving into her college dorm is whether or not she brought enough pairs of jeans. Peter worries that his social awkwardness will persist at Brown University. The one thing they all have in common is that they are good people who deserve happiness. For some, it will come easily. For others, it will seem perpetually out of reach.

Littky lets the stories speak for themselves. There is no narration telling us how to interpret the events in the lives of these people. Disco and Quay never complain about how hard they have to work. For Disco, it’s simply a fact that he has to live with 3 or 4 people at a time and keep his partying to a minimum, lest he get kicked out of his program. Quay’s first choice for school was Virginia State, but she had to stay in Michigan when her loan fell through. As her mother’s health worsens, Quay has to drop out altogether and get a second job. She doesn’t blame anyone when her mother has multiple heart attacks because she can’t afford her medication. But the deduction is unambiguous. Peter and Sarah will never have to support their parents. Their families will always have access to health care. Quay has done everything right in her life but, because she didn’t start out with that financial boost, she simply cannot get ahead. At one point, she has three jobs to help her family stay afloat as she plugs away at that degree. Because she is doing it all on her own, it takes her 10 years to graduate. Disco only manages to finish in 4 because of his athletic scholarship. Peter laments, “I don’t know what to do with my money so I buy instruments”.

Sarah has the biggest arc in terms of perspective. When she first leaves Florida, she is a Christian, and she goes on a spiritual journey that spits her out into a secular life with hints of Judaism. She’s grateful that her parents paid her way through college and for her to travel to 30 countries before the age of 25. Meanwhile, Quay gets her first passport toward the end of the film and still has barely left Michigan.

Peter also has a late-stage epiphany about his privilege. He knows that a lot of things were handed to him because of his background. But acknowledging it is only the first step toward equity.

All of these kids started in essentially the same place from an academic standpoint. They all graduated at the top of their class. They all went to college. They all had personal struggles. But the white kids always had their parents’ money and family to fall back on. At one point, Quay lists everyone in her life who has died over the past year, including her mother. Disco searched for family and thought he found it with his college girlfriend, but had to start all over when their marriage fell apart.

Boyhood was released seven years into the filming of Most Likely to Succeed. The comparison is obvious, but story-wise, Littky is on a whole other level. Linklater’s film is a neat trick in narrative fiction. But Most Likely to Succeed depicts real lives, unscripted tragedies, triumphs, roadblocks and boons. Littky’s film exposes the lie that we’re told: That everyone has an equal shot in this country. That all you have to do is be a good boy or girl and everything will come to you in time.