THE MOST HATED WOMAN IN AMERICA

(The 2017 SXSW Film Festival opened on March 10 and ran all week until March 18. HtN has you covered and GUARANTEE more coverage than any other site! Check out this review of The Most Hated Woman in America which is also streaming now on Netflix.)

It doesn’t take much for a woman to become the recipient of scorn in America. Usually, just pointing out any sort of inequality between the genders will get a girl in trouble. So it was especially easy for the outspoken atheist and “non-conformist”, Madalyn Murray O’Hair, to earn the title of “Most Hated Woman in America” in 1963, when she won a lawsuit that resulted in banning scripture from public schools. Tommy O’Haver’s identically titled biopic, stars Melissa Leo as the brazen woman in question, framing the story around the true crime ending to her life. In 1995, O’Hair was kidnapped, along with her youngest son and granddaughter, and held for ransom. Perhaps it’s because of this that O’Haver and co-writer Irene Turner visited the Coen tonal wellspring in their script. It doesn’t quite succeed in emulating its influences, but it does effectively tell the story of a woman who deserves to be remembered.

Being both a feminist and an atheist myself, I was surprised that I had never heard of O’Hair. Her lawsuit was instrumental in enforcing separation of church and state. This made her both an instantaneous hero and villain. She relished the title bestowed upon her by a national magazine (“Look” in the film, “Time” in real life). But she never had any long-term designs until the mail started flooding in. Some envelopes contained vitriol and feces, while others contained praise and cash. This was all the inspiration O’Hair needed to found a non-profit organization called American Atheists.

At first, she fought for the cause alongside her young son, William (played as an adult by Vincent Kartheiser). After the lawsuit, he proudly declared to the ensuing media blitz that he and his mother were “non-conformists”, which was, I suppose, the blueprint to what would be called Progressives today. She brought her message to the talk show circuit including Donahue and Carson. Eventually, she crossed paths with evangelist Bob Harrington (Peter Fonda) and he suggested that they take their lively TV debate on the road to keep the cash flow steady. 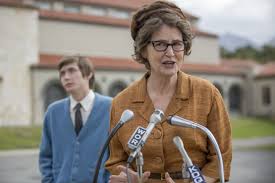 O’Haver’s film makes no bones about O’Hair’s more unsavory qualities. William develops a drinking problem as a result of his mother’s controlling tendencies and rebels the only way the son of a progressive Atheist can: by finding Jesus. She also squirrels some of that non-profit money into an offshore account and makes the mistake of trusting one of her office managers, David Waters (Josh Lucas), with that information. He eventually uses it against her when he orchestrates a kidnapping plot. He had originally intended to keep her and her family only a couple of days. But O’Hair is not the type to easily fold to demands, and thanks to her general unpopularity, only an employee named Roy (Brandon Mychal Smith, You’re the Worst), and the San Antonio journalist (Adam Scott) he recruits, are even looking for her at all.

The narrative is non-linear, opening in 1995 with O’Hair and her family tied to chairs with bags on their heads. As the kidnapping plot progresses, the narrative flashes back and forth through time, explaining O’Hair’s origins as well as the erosion of her relationship with William. Part dark comedy, part true crime thriller, the changing hair and clothes help orient the audience to the temporal fluctuations.

The extremely talented Juno Temple is underutilized as little more than a set piece, filling the space of the granddaughter (William’s estranged daughter) with nary a memorable line nor influence on the plot. But Leo owns the role of O’Hair, somehow managing to convey all the nuance of this very complex and brilliant rebel, entrepreneur, hell-raiser, feminist, and single mother who managed to nurture one child whilst alienating another. Kartheiser is another highlight, as a man who spent his childhood trying to please his mother, and his adulthood trying to piss her off.

It’s not a perfect film, but one gets the impression that Madalyn Murray O’Hair would have been pleased as punch to be remembered as such a force of nature. The re-created media footage includes many of her brilliant zingers including, “Religion has caused more misery to all of mankind in every stage of human history than any other single idea,” and, “Two hands working can do more than a thousand clasped in prayer.” We could use a woman like that today.