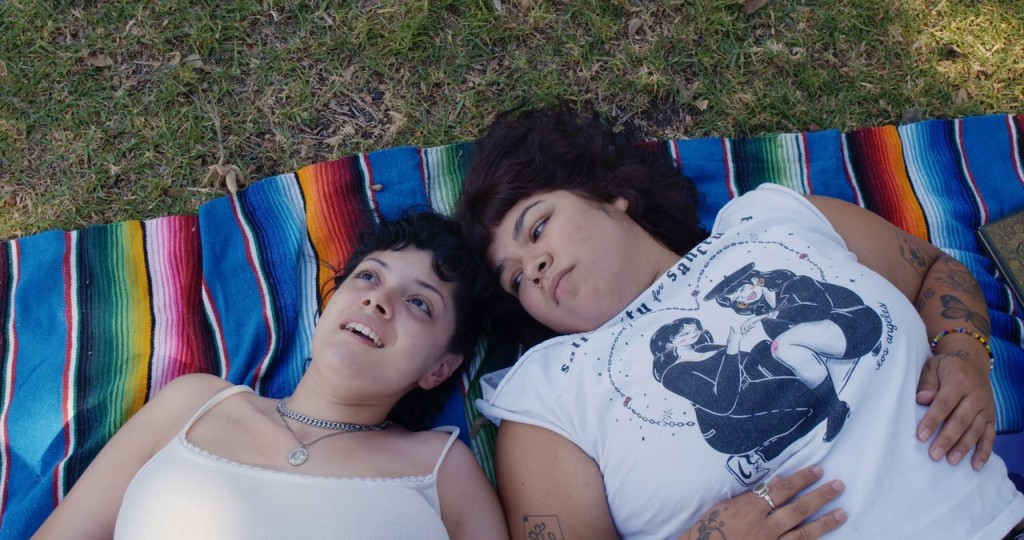 (The 2022 Sundance Film Festival runs January 20-30 all virtually. Check out M.J. O’Toole’s movie review of Mija. Like what you see here on Hammer to Nail? Why not pay just $1.00 per month via Patreon to help keep us going?)

According to the American Immigration Council, more than 16.7 million people in the U.S. have at least one family member who is undocumented. Many live under the constant threat of deportation. How do the first-generation Americans in these families grapple with this while trying to forge their own paths? In her moving and sparkling documentary Mija, director Isabel Castro focuses her lens on two first-generation Latinas, both in the music industry and trying to accomplish their dreams, all while dealing with the complex familial ties and cultural pressures they were born into.

At the start of the film, Castro introduces us to Doris Anahí Muñoz, a 26-year-old music manager born and raised in California to Mexican parents who crossed the border to live in the United States. Her loving family life from past to present is introduced through a montage of home videos, illustrating a period when her entire family was together. Five years prior, her older brother Jose was deported. Because Doris is the only U.S. citizen in her family, she is able to drive back and forth across the border to Tijuana to visit him. She is her family’s main source of connection to him due to her parents being unable to leave the country to visit him, to their anguish.

To start the application that will attain her parents legal status, Doris relies on her job as a music manager. Her main client is young Latino star Cuco, whom she helped bring from backyard performances to international fame. We get a peek into their working relationship and friendship, with Doris acting as both companion and confidant to Cuco. Cuco’s music reaches and connects with a new generation of diverse youth, something once thought unlikely for Latinos who come from working-class backgrounds. As Doris explains from a personal stance, “When you haven’t seen someone like you succeed, it feels impossible.” In the scenes of Cuco’s performances, Castro turns her focus to the young Latinas in the audience singing with him in Espanglish, which shows how much he speaks to them and their generation. Eventually, things come to a halt as the COVID-19 pandemic hits and all events have to be canceled, marking the start of Doris and Cuco going their separate ways. After a brief rough patch and some encouragement from Jose, Doris decides to get back in the game and soon discovers a potential rising talent on Instagram.

Enter Jacks Haupt, a young Latina singer/songwriter who, like Doris, is also a child of undocumented immigrants. When we first meet her, Jacks is trying to rise in her career through a series of small-time gigs with the support of friends and her loving boyfriend, with the exception of her own family who is uneasy about her wish for fame. When Doris reaches out to her and they finally meet in Los Angeles for a recording session, they connect over their shared upbringing. This creates a kind of mentor-mentee friendship as Doris knows the complexities of trying to pursue your dreams while dealing with the obligation to support your family. Jacks’ life at home is further explored in a grueling scene where her parents aggressively berate her over the phone, ridiculing her career path and refusing to listen to her plans. The camera is kept on the young woman as feelings of sadness, anger, and inefficiency wash over her in a moment that could trigger similar emotions for those who have parallel relationships with their families. Despite trying to navigate a world where many people of their generation don’t have to deal with the possibilities of familial separation, Doris and Jacks work to make the moment their own and continue to yearn for triumph and serenity.

Director Isabel Castro portrays a young generation of Latin-Americans working to live in the moment and grab hold of the opportunities within their reach. With dreamlike cinematography and editing, she emphasizes the musicality of the film, putting her two subjects in the spotlight. One such example is a breathtaking moment where they cruise around L.A. at night in a convertible in movie star fashion, like a couple of Sofia Coppola protagonists. Mija’s joyous and vigorous aesthetic succeeds in whirling our emotions. The importance of family is never insignificant. A glowing tribute to children of immigrants and their families, Castro and her two subjects light a beacon of hope for a life without fear that will hopefully connect with a large, diverse audience.