A brief encounter, spied upon from surveillance camera distance—a fragment of narrative that guards its mystery. Mercurio, the latest offering from wondrous Portuguese auteur Sandro Aguilar, marks a new phase in his ambitious body of work.

Since founding his “O Som e a Fúria” production company in 1998, Aguilar has embarked on a voyage deep into the heart of pure cinema, creating a series of dark, painful, mysterious, dazzlingly realized films about ghost-like humans living side by side in isolation, in claustrophobic, menacing environments. Aguilar’s films aren’t built around story, not even in the David Lynch elliptical dream-logic sense. Robert Rauschenberg would be a more apt comparison. Aguilar uses narrative as a raw material, bending it, molding it, breaking it into pieces, to make films that are things unto themselves. His first period reached a climax of sorts with his debut feature, 2008’s A Zona— a cold, smeared, gliding, layered, bloody, baroque vision of the modern world, shot by Paulo Ares, a Jimmy Page of the movie camera.

With his two new shorts, Voodoo and Mercurio, Aguilar has moved into light and open spaces: literally an airplane hangar in Voodoo, and out in nature (sort of) in Mercurio. The influence of his new cinematographer, Rui Xavier, is difficult to quantify: certainly in these films the camera is more static and the compositions somewhat simpler, but the overall aesthetic is largely unchanged. A cold grey-green is, for example, still the go-to color, and Aguilar’s characteristically paper-thin depth of focus gets plenty of screen time. 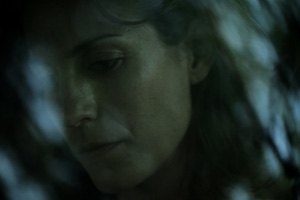 Mercurio opens with an extended visual overture: a series of locked-down shots of trees, birds, and raining yellow flower petals. Parked cars soon appear—a blunt and cold counterpoint to all the fecundity. We’re on the edge of a parking lot. Deep, bold, painterly compositions, classic Aguilar, establish a sense of ceremony before a human is finally introduced, with an elegant rack focus from reflections on a windshield to the face of a little boy inside a car. Shooting through glass is a house specialty for Aguilar, and much of the remaining film is a series of effortlessly gorgeous, ethereal moving portraits, stained with cloudy white dots and streaks of reflected sky from above the trees. The action itself is casual; the tension comes from the POV, which suggests a stalker, a paparazzo, a private eye. Possibly God.

The boy’s father (Albano Jerónimo) tells him “dad will be right back,” and goes to meet a woman (Aguilar muse Isabel Abreu) in a nearby car. After a few words and a few shy smiles, he experiences something new to the Aguilar oeuvre—a moment of human connection. An embrace, some nuzzling, and soft kisses.

The film creates a dialogue with Aguilar’s earlier films, most notably Sem Movimento, his short from 2000 (also starring Abreu) in which four people, trapped together in a mall, try to win a car by sitting inside it the longest. Mercurio’s relationship with Voodoo is highly symbiotic. In Voodoo, Jerónimo plays a shared-custody dad to a slightly older son, suggesting it’s a sequel to Mercurio. But he also meets and develops a barely-looking-at-each-other connection with a character played by Abreu, which would make it something of a prelude to Mercurio’s clandestine meeting.

Aguilar still shoots on film, and takes advantage of film’s inherent alchemy; it’s easy to get lost in the pleasure of the image itself. Mercurio could be described as idyllic—the kiss is sweet and delicate—and yet the characters are strangely disembodied, and, typically for Aguilar, void of eroticism, isolated by steel and glass from the flowering of spring that surrounds them. There is guilt and ambivalence before and after the kiss—the dad reveals that his son has a fever; when the woman asks if he’ll be okay, he replies, “He’s used to it.” The woman is soon left alone, sipping water from a prosaic plastic bottle, lost in thought, as we hear the high-pitched sound of a cheap car engine start up and drive off. The outro returns to the locked down shots from before, but now focuses on empty cars, as the birds keep chirping and distant bluegrass music—of all things—wafts into the soundtrack. The film gently floats away, a thing of beauty and enigmatic power.