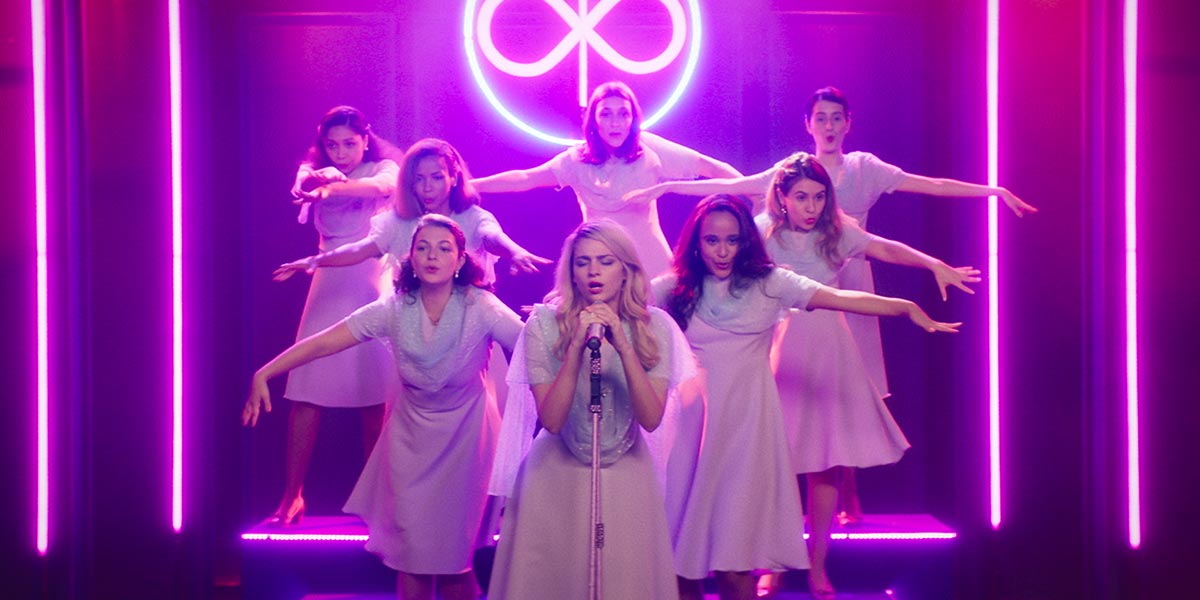 Beware the face that turns you to stone! Or, at the very least, leads you astray towards things you’d rather not see. That way lies sin, and life is much more manageable within a strict set of rules. Such is the setup of Medusa, the sophomore feature from Brazilian director Anita Rocha da Silveira (Kill Me Please), in which she explores how religion and patriarchy are used to control women. It’s even better if you can teach them to control themselves.

As the movie opens, we pull back from an eye illuminated in red and green colors, revealing a female body contorted in what turns out to be an online video of a dance (or yoga pose). A young woman watches that dance on her smartphone as she heads home, only to suddenly find herself hunted by a group of other women wearing white face masks. They give chase, catching their prey and delivering a beating. For what? They call her “slut,” “pervert,” “homewrecker” and more, though she seems confused. It would appear that the mere act of having interests in such things as popular song and dance is enough to transgress. Afterwards, off go the vigilantes, removing their masks and walking towards the camera. The last one is Mari (Mari Oliveira, Kill Me Please), and she very soon becomes our main focus.

Mari has it all together. She is even asked by her family to help a cousin from the provinces adapt to life in the city. Her approach? To bring her to a meeting of her vigilante group, which also doubles as a choir at her church. That institution is led by a charismatic male preacher, urging all to lead traditional lives, follow the word of God and reject secular laws. Their symbol, in place of a cross, is an infinity symbol. Mari and her friends, including bestie Michele (Lara Tremouroux), when not out delivering beatings, spend time flirting with their male counterparts, their ultimate purpose to find a mate.

But something goes a little wrong on the road to bliss. Michele tells everyone the tale of an actress whose face was burned by their group’s predecessors, as punishment for her lascivious manner, and though she ostensibly vanished, Mari makes it her mission to find her so they can finish the job. This new quest conveniently coincides with her firing from a job at a plastic-surgery clinic after her face is scarred by a would-be nighttime victim who fights back. And so she takes her nursing skills to a hospital for the comatose, believing that actress, Melissa, to be there. Little does she realize that she will discover more than just her target.

A biting satire of religious fundamentalism, Medusa is also a frightening portrait of extremist violence and righteous self-abnegation, with a little sex, drugs and rock & roll mixed in. As Mari’s world expands thanks to those she meets at the new job, she begins to question her previous beliefs. After all, it’s a lot of fun to let go. No longer in the mood to hunt down other women minding their own business, she drifts away from Michele and the others, though her best friend doesn’t go quietly. Freedom is contagious, it turns out, but also dangerous.

Though there are no literal snakes anywhere, they do appear on posters showing the tree of the Garden of Eden. Da Silveira also frequently turns her camera on Oliveira full-bodied locks of hair. Is she the titular creature? Is Melissa? Or is it the collective will of liberated women that is the true monster (to men, that is)? One of the great pleasures of this fascinating work of art is that there is plenty of room to pick your own interpretation. One thing is certain, however, which is that Medusa will gaze at you and you will gaze right back, all the stronger for it.